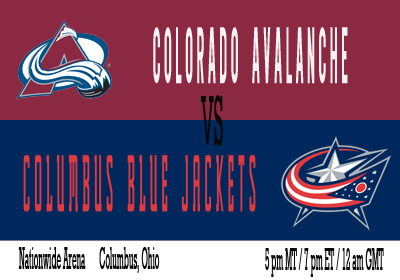 The new-look Avalanche are in Columbus tonight to take on the Blue Jackets. The Avs have won the last 5 games against the BJs and are 28-7-1 lifetime, so instead of yammering on about Derick Brassard or Mathieu Garon or that freaking annoying cannon I'll skip the niceties and move on to more important details, like sorting out the Avs' revolving-door roster.

Here's what we know for sure: Peter Budaj will be between the pipes for the 7th consecutive game. Joe Sacco hinted that John Grahame might play tomorrow in Detroit, but I think it would take a big meltdown tonight by Budaj or the whole team for that to happen. New arrival Ryan O'Byrne will be available and while Skipper Joe wouldn't commit, he clearly has no confidence in David Liffiton (7:30 on Tuesday). Figure on O'Byrne to start. Adam Foote may play Saturday, sending someone to the pressbox and Liffiton to Cleveland. If no one gets hurt tonight, that is.

Up front, things are a little murkier. Pencil Greg Mauldin into David Van der Gulik's spot on the 4th line. Phillipe Dupuis will be the center...and that's about all we know. There's talk that Kevin Porter will skate on the 1st line with Stastny and Stewart. David Jones is expected to play tonight...but where? If Porter does play on the 1st line, it would seem like Jones would pop into the 3rd line and bump Cody McLeod down to the 4th line. Honestly, it all sounds a little Frankensteinesque. Or maybe I'm thinking of Marty Feldman as Igor.

I do have a special request - we're trying to get to 500 facebook followers by the end of the year so. Many of the hockey blogs are doing really creative things to bolster their facebook numbers. As you well know, I am not creative. So I'm just going to ask nicely. Facebook: Like Us If You Don't Have Anything Better To Do.