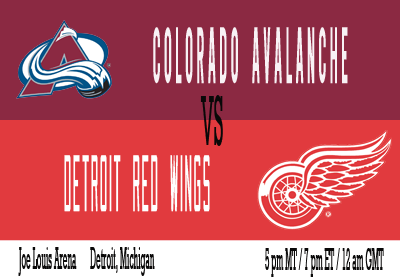 The Avalanche make their final visit of the regular season to the grand city of Detroit tonight, squaring off against the Red Wings at the Joe Louis arena. The Avs won the previous meeting 5-4 in the shootout and are 4-0-0 against the Central division to date. The Wings are playing well, though, having won 5 of their last 6 and 9 of their last 11.

Both teams can score - Detroit and Colorado are #2 and #3 in the league in goals per game and each team has hit the 4-goal mark 7 times this year. Detroit ranks 10th in goals against (thanks to you know who) while the Avs are 24th. Peter Budaj has been playing very well, and that will need to continue this evening. Unless, that is, Skipper Joe goes with John Grahame. Gulp.

I'm not sure there's been a more enjoyable moment this year than Greg Mauldin's short-handed, game-winning first NHL goal in his first game with the Avs. He's the 4th Avalanche to score their first goal in the last 5 games (joining David Liffiton, David Van der Gulik and Phillipe Dupuis). Of course, all eyes tonight will be on Jonas Holos, Kevin Shattenkirk and Colby Cohen. All three are still looking to pop their NHL cherry. The word on Cohen, by the way, is that he missed the 3rd period with illness - he had skipped practice on Wednesday with a bad cold.

It wasn't quite as high on the excitement scale, but it sure was nice to see a big, hulking defensemen out there hitting people. Well, we've seen that a lot, actually, but it was nice for that guy to be wearing an Avalanche uniform for a change. Ryan "Snatch" O'Byrne didn't have a flawless game, but he threw some hits around as advertised. And he's big. More please!