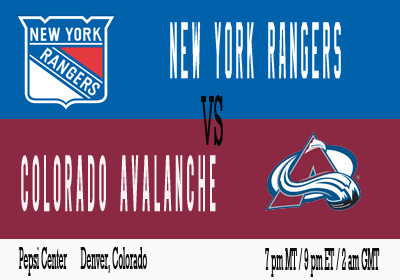 The Colorado Avalanche tonight will try for something they haven't had in a long time: a 3-game winning streak. The Avalanche have played 36 games (including playoffs) without being able to string 3 wins in a row, a stretch dating back to March 16th. Heck, even the lowly Edmonton Oilers have managed a 3-game winning streak since then. Twice. The Avs would also pull even with the Vancouver Canucks atop the NW Division (Vancouver would still hold the tiebreaker), but that's secondary to being able to string some wins together.

Our heroes will be squaring off against the New York Rangers. Conveniently, we beat them already earlier this year 3-1, with 2 goals by Chris Stewart (who else?) and Dan Winnik. The Rangers are led by 24-year old Brandon Dubinsky who is having a Liles-like explosion this year with 18 points in 19 games after 3 straight 40-point seasons. The Rangers also have Sean Avery, who I'm beginning to think is kind of a dink. Oh, and Marian Gaborik is back and has 4 goals in his last 4 games. He scored a hat trick against the Avs when these two teams squared off last year.

The Avs get all sorts of cool points for their last two wins, first by putting the "Ack!" in Halak (yeah, I know) against the Blues on Monday and then by coasting for about 80% of the game on Wednesday before coming back to defeat the Sharks. That's great and all, but the Avalanche can't continue to start off games by letting the other team rip through you like a hot knife through butter. And yes, Mr Foote and Mr Wilson, that is completely aimed at you.

Amazingly, we're at paragraph four and we're just getting to the following: Craig Anderson is back. As of this writing (Thursday night), we don't know if it will be Anderson or Peter Budaj tonight (the Avs are also in action on Saturday). A few weeks ago, this would have been EXTREMELY IMPORTANT INFORMATION. But Budaj has played pretty darn good during Anderson's absence and has proven something shocking: the Avalanche can win without Craig Anderson. That is no knock on Andy, who absolutely carried this team last year. It's just that this right now this is a team that doesn't need a goalie to stand on his head to pull out the W. The Avs' offense is the key at the moment - the team is 4th in the league in scoring and has 4 players averaging a point a game. Maybe that won't last. Maybe it will. For now, though, it doesn't really matter who plays in net.

I would like to point out, though, that the winning goalie back on that last 3-game streak on March 16th? Yeah, it was Budaj.