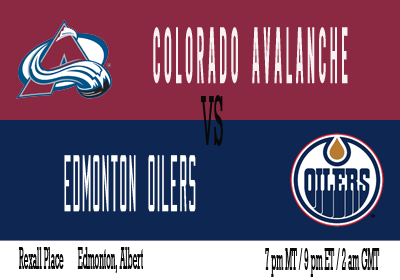 Happy Thanksgiving to all our American friends! To everyone else, happy Thursday. Either way, the Avalanche take on the Edmonton Oilers tonight in their backwards arena. Win, and the Avalanche re-take first place in the NW. Lose, and you have to deal with the embarrassment of losing to a floundering Oilers team (5-11-4). On paper, the Oilers are terrible. The game isn't played on paper, though. The Avalanche were flat against the Canucks last night; it they try to sleepwalk through this one, it could end poorly.

Colorado lost Adam Foote and Craig Anderson to injury last night. Well, technically Anderson injured his groin during yesterday's morning skate, but the end result was that both we're gone by the first intermission last night. No Lake Erie transactions listed as of yet today. Presumably, Kyle Quincey will return to the lineup tonight after 3 healthy scratches and Peter Budaj, who is 5-3-1 all-time vs Edmonton, would get the starting nod. Hopefully we'll learn more about the severity of both injuries today, but with the holiday that news may not be immediately available (Mike Chambers is following the team for the Post).

At any rate, the Avalanche should be the better team tonight...if they remember their lunch boxes. Go Avs!