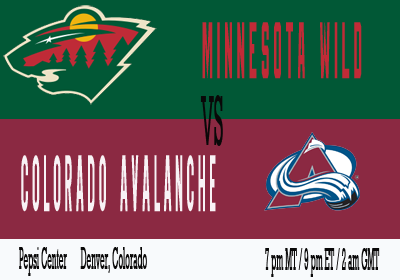 The Colorado Avalanche host the Minnesota Wild tonight at the Pepsi Center. After winning four in a row, the Avalanche dropped two straight this week, both to NW Division teams. The Avs will want to reverse that trend tonight. Losing is bad. Losing regulation games in your division? Very bad. The Avalanche are 1-4-1 against NW Division teams, and that won't cut it. One small bit of good news: after tonight, Colorado wont play a NW team until December 23rd when they host...these Minnesota Wild.

Honestly, I thought the Avalanche looked pretty good against the Oilers. I totally agree with Peter Budaj's post-game assessment (via Mike Chambers):

Of course, he did leave out the whole "Ryan Wilson laid an egg out there" part of it, but Joe Sacco wasn't so afraid to set the record straight:

"We didn't have a good start to the game," Colorado coach Joe Sacco said. "We had a few guys that weren't ready when the puck dropped and that cost us a couple of goals. We got ourselves back into it and played pretty well after that until we got caught on our heels a little bit in the third.

Ryan Wilson has played some really good games in an Avalanche uniform. None of them have been in the last 6 games. Since he returned to the lineup on November 15th, he's been on the ice for 10 of the 16 even strength goals scored against the Avs, including 2 in the first 4 minutes of the Oilers debacle. As of late Thursday night, the Avalanche had not recalled any defensemen (the Monsters played Friday night and will be in action this afternoon as well). Unless Adam Foote is ready to go (neither Foote nor Craig Anderson were on IR as of Thursday night), Wilson looks to be in there again, perhaps playing with Scott Hannan (he started the Edmonton game playing with Kyle Quincey, but was with Hannan later in the game...when he made it onto the ice). I'm not sure what has happened to Wilson, but he's poor play has been noticeable. When the Avalanche were winning despite his gaffes, it was mildly irritating. Now that the Avalanche have lost a game in large part because of mistakes, the irritation level is much, much higher.