Share All sharing options for: Game 14 Preview: Flames at Avalanche 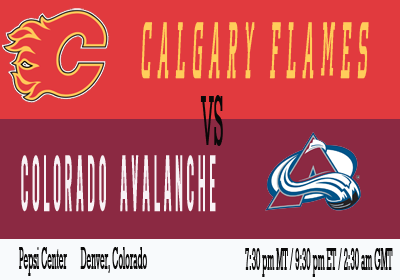 The Colorado Avalanche close out a 4-game home stand tonight as they host the Calgary Flames at the Pepsi Center. When these two teams squared off on October 28th, the Flames were riding a 3-game winning streak and the Avalanche were breaking a new starting goalie in Peter Budaj. The Avalanche won 6-5 and the teams have been going in alternate directions ever since. The Avs have won 3 of their last 4, scoring 5 or more goals in all 3 of their wins. The Flames have lost 4 straight (including that 6-5 loss) and have scored just 3 goals in their last 4 games. Will the Avalanche be able to extend the Flames' misery tonight? If they can duplicate the effort they put in against the Blue Jackets and Stars, that's a real possibility. If they coast like they did against Vancouver, all bets are off.

One thing is a fairly safe bet: the game will be close. The last 8 meetings between the clubs have been decided by just 1 goal. And 7 of those 8 games were decided in regulation, an absolutely critical stat in what is again shaping up to be a ridiculously close race top to bottom in the Western Conference.

While Adam Foote and Craig Anderson skated briefly on Monday, don't expect many changes on the lineup front. Ryan Wilson has been ruled out. David Jones is officially questionable, but Skipper Joe didn't sound very enthusiastic about the odds of having Jones back tonight. While David Liffiton had a key fight against Tim Jackman the last time the teams squared off, it's doubtful he will force Kevin Porter, Philippe Dupuis or David Van der Gulik to the press box after the outing they had on Saturday.

Paul's Coffey has the recap tonight.

Today's factoid: Paul Stastny has more points against the Flames than any other NHL team (33 points in 26 games). Meanwhile, Matt Duchene has just 1 point (an assist) in 7 games despite having 16 career shots against Calgary (3rd most behind Vancouver and San Jose)