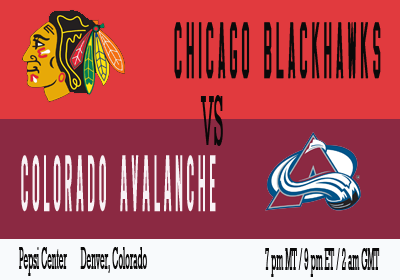 Can it be that we're already 30 games into the season? The Avalanche host Q and the Blackhawkians tonight at the Pepsi Center. We last saw the 'Hawks about, oh, 30 games ago in a wild opening night overtime win for the Avalanche. The teams have followed a fairly similar path since then, as just 1 point separates them in the standings.

The key question for the Avalanche: who the heck will play? Milan Hejduk missed Saturday's game with a groin injury and Kyle Quincey left the game early in the first after sliding hard into the boards; he was reportedly wearing a sling after the game. There's no word (official or other) about the status of either as I'm preparing this, but I bet both will be out. Ryan Wilson dressed as a 7th defenseman on Saturday and played extremely well after Quincey went down, so him joining the lineup tonight is a no-brainer. The Lake Erie Monsters are idle until Friday, so you figure a defenseman might get called up for insurance purposes. Unfortunately, Jonas Holos missed his 2nd straight game with the flu on Sunday and David Liffiton left the game with an upper body injury. So, Cameron Gaunce, anyone?

Up front, the only other healthy player on the roster is David Koci. If the injury to Hejduk is severe enough, the Avalanche might call up a forward for tonight's game as well. Ryan Stoa scored two goals on Sunday - LEM's 5th straight victory er, 1st win in 5 games - and is tied for the team lead in goals with 9. Just as an example.

Whoever dresses, it should be a high tempo game for both clubs. But I think the bus keeps racing along tonight. Go Avs!