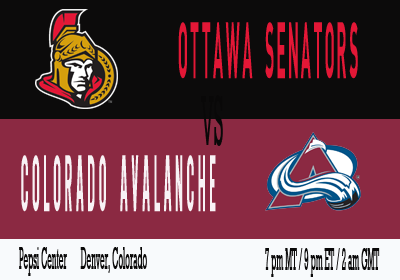 Well, here we go again. And no, I'm not referring to yet another ugly preview graphic. The Avalanche are about to settle in for the winter in Denver with 17 of the next 22 games at home. The Avs' have earned it - their 18 road games to this point are the most in the Western Conference, but this is no time to rest on the laurels and enjoy Mrs Foote's home cooking. Because, like last year, this is probably the stretch that decides the Avs' season.

You remember last year, right? The Avalanche spent much of the early part of the season on the road, surprising just about everyone (ourselves included). On December 9th, the 2nd place Avalanche returned to the Pepsi Center  where they started a stretch of 19 out of 28 games at home. The Avalanche went 13-6 in those 19 home games and 18-10 overall to essentially solidify their playoff chances. The Avs had slipped from 2nd to 6th, partly because teams like Coyotes and Canucks were white-hot then, but they were 10 points ahead of the 9th place team - a cushion that would come in handy, as they limped to an 8-14 record the rest of the way.

This year, the Avalanche spent much of the early part of the season on the road, surprising just about everyone (ourselves included). For some reason, I actually typed that out instead of just copying. At any rate, when the Avalanche depart for Phoenix to start a 4-game road trip on February 7th, we will likely be looking back at this home stretch as either make or break. If the Bang Bang Bus continues to roll at home, the Avalanche will be in an excellent position to make the playoffs again. If the bus breaks down between now and then, it will be tough to recover - 18 of the last 29 games will be on the road, including 3 sets of back-to-back road games and 2 other home-road back-to-back series. These 22 games should all be about, if you will, pushin' for the cushion.