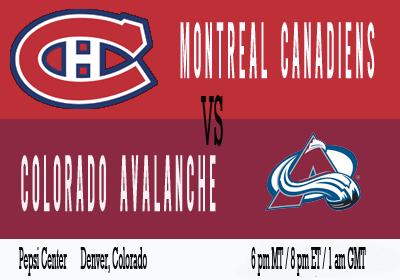 The Avalanche host the Canadiens tonight looking to do something they've only done three times since the lockout: win six games in a row. The last two times (March of 2008 and January of 2010 respectively), the 6th win came against the Dallas Stars..and the Avalanche failed to get #7 in the next game. The other time, the 6th win came against the Montreal Canadiens. This was back in 2005 (David Aebischer was the winner and Cristobal Huet was the loser) and the Avalanche ended up running the streak to 8 wins before finally suffering a loss. For his troubles, Abby was shipped off to the Canadiens a few months later, but that's another story.

Here's the trick though. In those 3 games where the Avs won their 6th consecutive game, the Avalanche allowed a total of 2 goals.That's not how the Avalanche have been winning lately. Yes, the Avs are scoring a ton of goals...but they are giving up a bunch as well. Just slightly less than a ton, to be exact.  It's fun to win these crazy games, but can we really count on winning 6-5 every night? No. Craig Anderson has looked shaky behind a leaky Avalanche defense. The leaky defense we expect. Hell, at this point we almost embrace it. Craig Anderson looking pedestrian? Not so much. Anderson excelled last year behind a poor defense. He doesn't need to carry the team this year, but he needs to play better than he has. This would be a GREAT time for him to go on one of those awesome hot streaks and maybe grab that first shutout of 2010. Is there a better night for an Avalanche goalie to get a shutout - against the Montreal Canadiens, no less - than the 33rd game of the season?

Actually, I think it's time to take make Patrick Roy Night a new yearly thing. Every year, the Avalanche should honor this night by shutting out their opponent on the 33rd game of the year. This hasn't worked out very well so far; since moving to Denver, the Avalanche haven't recorded a single shutout in game 33. Even worse, the Avs have been shut out 3 times in the 33rd game, including each of the last two seasons. Clearly, it's time to reverse this trend. And I need to stop looking at numbers. Go Avs!