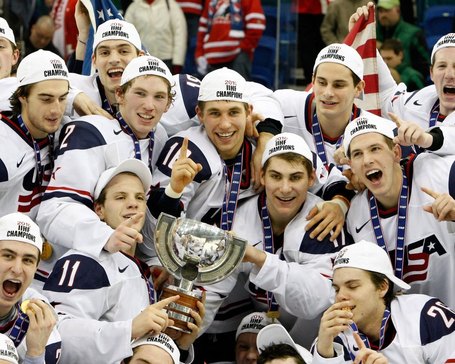 It wont be long now before hockey players from around the world gather in the city of Buffalo, NY for one of the most exciting tournaments on the hockey calendar...the 2011 IIHF U20 Championship, also known as the World Junior Championships (WJC). The location of this tournament changes annually, but typically begins on the 26th of December.

Hockey fans in Canada go nuts for this tournament, and why not, Canada has taken gold 15 times; the most of any nation.  Canada had won the tourney five years in a row before a scrappy bunch of Americans took gold in a thrilling overtime final in the most recent tournament.

The U20 Championships officially began in 1977, when the Soviet Union beat Canada for the gold medal.  Fast forward to 2010, the Americans will look to defend their title on their home soil.  The US has only won the tournament twice and has in recent years taken a more serious approach to this tourney and other international tournaments in general.

For Avalanche fans, the 2011 WJC looks to be an exciting one.  Up to five Avalanche prospects (remote chance of six) could participate in the event.  In addition, current Avs forwards Matt Duchene and Ryan O'Reilly are still eligible for the tournament, but obviously will not be released by Colorado.  Earlier this week, it was announced that Joey Hishon (17th overall, 2010), Calvin Pickard (49th overall, 2010), and Tyson Barrie (64th overall, 2009) were named to the Canadian National Junior Team selection camp.

In the second week of December, 39 Canadian hopefuls will gather in St John's, NL.  From this group, the Hockey Canada brass will put together a team they hope can reclaim gold from the Americans.  Calvin Pickard will likely be one of the two goaltenders named to the squad.  His biggest competition for starting duties will be Olivier Roy.  Roy was a 2009 draft pick of the Edmonton Oilers and current plays for Acadie-Bathurst of the Quebec Major Junior Hockey League (QMJHL).

Unless he falls on his face, Joey Hishon should also cement a spot on this team.  Hishon will likely be featured as a top six forward for the Canadians.  Hishon has been nothing less than spectacular for the Owen Sound Attack of the Ontario Hockey League (OHL); averaging two points per game (37 points in 18 games as of this posting).  What will be interesting is if he will center a line or shift to wing.

Of the three Avs prospects invited to the camp, Tyson Barrie will face the toughest challenge in making the squad.  He'll have to distinguish himself as the camp will feature players who have a similar style.  Barrie does have a few things working for him, he is the reigning Defenseman of the Year in the Western Hockey League (WHL) and is currently the captain of the Kelowna Rockets.  After recovering from an injury that caused him to miss out on Avalanche training camp, he has rebounded with 22 points in his first 18 games (which puts him sixth in scoring for defensemen).

When the Canadian selection camp roster was announced, one notable Avalanche prospect was missing, and that was Stefan Elliott.  It's possible that Elliott could be a late addition to the camp as Brandon Gormley (2010 first round pick of the Phoenix Coyotes) is expected to miss the tournament due to a knee injury.  There is no guarantee Hockey Canada will name a replacement, but Elliott may get a last minute phone call.

USA Hockey will announce their preliminary roster next week.  While it's clear that Jack Campbell (2010 first round pick, Dallas Stars), will be the starter for the Americans, the backup position is up for grabs.  Brandon Maxwell, a sixth round pick for the Avalanche in 2009, has played himself into the conversation.  In 17 starts with the Kitchener Rangers (OHL), Maxwell has a 12-5 record, goals against average of 3.38, and save percentage of 0.906.  It's unlikely the backup goalie for the Americans will receive much playing time, but just being named to the squad is an accomplishment.  It would be especially so for Maxwell, who probably wasn't even on the radar for this tournament at the beginning of the season.

In Europe, Avs 2010 fifth round pick, Sami Aittokallio, will likely be named one of the two goaltenders to Finland's roster.  This season, Aittokallio has split time between Finland's highest league SM-Liiga and their junior league Mestis (in addition to some international games).  Assuming he makes Finland's team, it'll be the first glimpse Avs fans will have at their recent draft pick.  Aittokallio is scheduled to play overseas through the 2011-12 season.

The 2011 IIHF U20 Championship is shaping up to be an exciting one if you are curious about the future of the Colorado Avalanche.  Even if a single Colorado prospect isn't named to one of these international teams, it's still a tournament worth watching and appreciating.