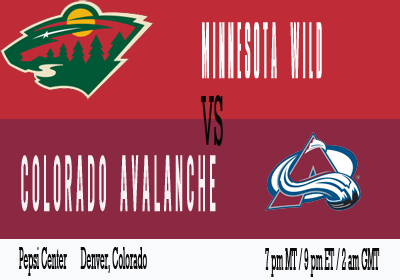 The last time the Avalanche and Wild squared off, the Avs won 7-4, Chris Stewart broke his hand on Kyle Brodziak's face and Scott Hannan was playing his final game in an Avalanche uniform. I would happily settle for a something a little less dramatic this evening...if it means a W.

The Avalanche hope to return to form against the Minnesota Wild tonight in a key divisional game at the Pepsi Center. The Avs' saw their 6-game winning streak come to an end on Tuesday and it wasn't pretty, with the Kings dominating in a 5-0 win. The 5-goal deficit was the Avs' worst loss of the season (although losing to the Islanders by 3 goals has to win some sort of dishonorable mention). It was also the first time the Avs have been shutout. Still, the Avs aren't worried:

"You’re not going to dwell on it too long. We had a nice stretch of games there and obviously last night we came out flat and really didn’t play well," said defenseman Matt Hunwick. "It’s not going to help if we keep dwelling on it, so we just have to prepare for tomorrow night’s game. After that we have a nice little break, so there’s no reason to not come out hard and be enthusiastic."

I have to agree with all of this. The Avalanche did not look good on Tuesday (while the Kings looked like contenders), but every team is going to have an off game. It's not time to worry, yet. But if the team keeps giving up 5 goals a game (Craig Anderson will again get the nod tonight), we could soon be talking about wheels and buses and bad stuff like that.

I think one of the odder stats going is that the Avs have at least held a share of the division lead at Christmas three out of the five years since the lockout, and they'll be trying to make it four out of six tonight. Meanwhile, the Avalanche have not won a division title in that same span. Clearly, we need to reschedule Christmas. Come back in April, Santa, okay?