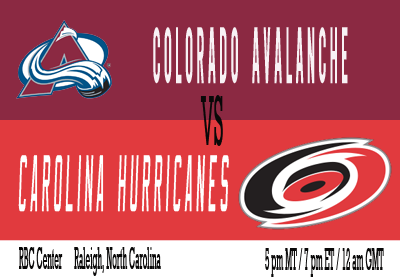 The Colorado Avalanche try to move back into first place in the Northwest Division tonight as they kick off a 5-game road trip against the Southeast division in Raleigh tonight. The Avalanche need to beat the Hurricanes and root for the Blackhawks to do the same against the Canucks later this evening. The Avs will be bolstered by the return of goaltender Craig Anderson and defensemen Adam Foote who have both missed the last 3 games with a leg injury. Tonight will also mark the debut of winger Tomas Fleischmann. Interestingly enough, this will be his 3rd consecutive game against the Hurricanes, much like Matt Hunwick ended up with two in a row against the Thrashers because of the trade.

For whatever reason, games between the Avs and Hurricanes have generally involved some elevated tempers. In the the last four meetings dating back to 2008, there have been 11 major penalties - 10 fighting majors and Tuomo Ruutu's major boarding call against Darcy Tucker - and 3 misconduct penalties (1 for Ruutu and 2 for Eric Staal). Not that there's anything wrong with that.

The Hurricane's scoring leader is Eric Staal, but #2 on the team is 18-year old Jeff Skinner. Skinner was drafted 7th overall this summer and is currently the NHL's rookie scoring leader. Of course, at his current pace, Kevin Shattenkirk will pass him by February but he's still playing well enough to finish 2nd to Shattenkirk in the Calder race.

Statistically, the Avalanche are better than the 'Canes pretty much across the board, but the thing that really jumps out at me is how awful Carolina is at faceoffs. 40.6%? Is that even possible? Since the lockout, the worst single season faceoff percentage was mailed in by the 2008-2009 Phoenix Coyotes, with a dreadful 44.8%. None of Carolina's regular centers are even at that mark. Amazing.

For those who missed it, Mike and Mrs @ MHH had a baby boy on Wednesday. Congratulations to mom, dad and big brother. See you in the 2028 draft, Gavyn!