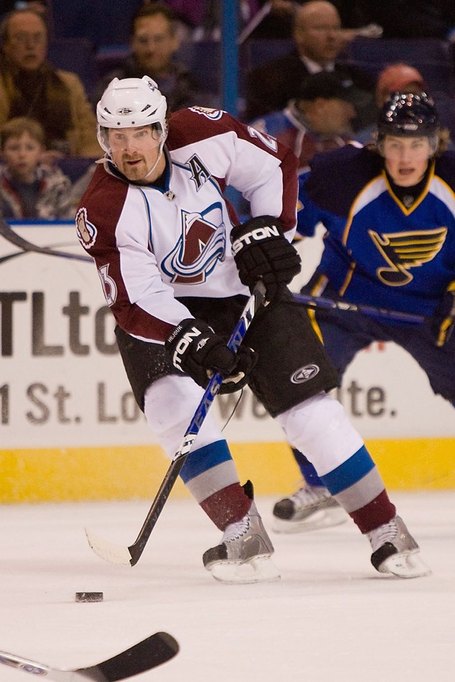 December 9th, 2007. Milan Hejduk has somewhat of a good game, scoring 3 goals and 3 assists as the Avalanche knock of the St Louis Blues 9-5. The hat trick was the 5th - and most recent - of Hejduk's career and the 6 points are a career high. His linemate, Paul Stastny, had 5 points (2 goals, 3 assists), tying his career best night.

On a grander scale, the win was the 1,000th win for the franchise. My notes here say that it was the 6th fastest to 1000 wins in NHL history, so that must be true.

December 9th, 2008. In his 3rd NHL game, Chris Stewart receives a brilliant shuffle pass from Ian Laperriere (over the head of the Kings' Kyle Quincey) and beats Jason Labarbera on the ensuing breakaway for his first NHL goal. Interesting for Stewie's goal to be a shortie. It's his only shorthanded goal to date - possibly because he has played a total of just 8:36 on the penalty kill over his 153-game NHL career...and average of about 3 seconds per game.