Will the real 2010 playoff teams please stand up?

Share All sharing options for: Will the real 2010 playoff teams please stand up?

Well this gives us (mandatory) time to pause and reflect upon some of the infinitesimal and obscure aspects of the season to this point. I'm taking the NHL standstill opportunity to dissect the standings without them changing by the time I finish writing this article. 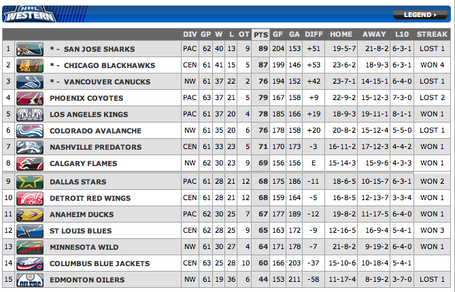 The bummer about Saturday's lame shutout against the Kings is that the AVS would be sitting in third place right now had they won -- or at least got to OT. I've been talking about how Andy should rest and Budaj get some action, but honestly I'm glad Budaj didn't play that game because then naysayers would have blamed that miserable showing on Boods rather than the listless team in front of him. Soapbox complete.

Regardless of Saturday's unsatisfactory SoCal performance, the AVS actually sit in a decent spot as the standings freeze for the next two weeks. They've opened a 5 point lead on the team below them, and sit neck and neck with LA, Vancouver and Phoenix for their playoff spot. The Northwest is up for grabs and I hope that despite their youth, the AVS can muster some inspired play and seize control over the NW lead - especially with Vancouver continuing their crazy road trip even after the Olympics for six more games. 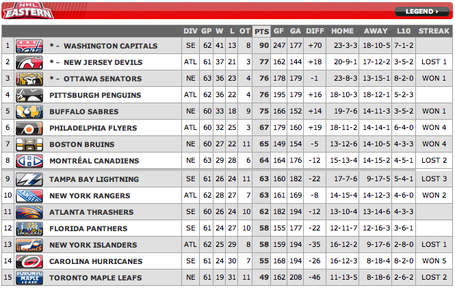 The push for the playoffs will be hotly contested as usual, but it is shaping up quite differently in the two conferences. If the Western conference teams took their records over to the East, FIVE Western teams that currently sit OUT of the playoffs would have enough points to be IN the playoffs out East. That tells us that the Western conference has been beating up on the Eastern Conference this year. The overall record for the West against the East is killer 127-72-22. The East's record vs the West is an Arnasonish (add it to the glossary) 101-111-27.

In fact, discounting OT, only 3 teams from the West have losing records against the East (Dallas, Edmonton and the Blues), as opposed to the 8 teams with losing records vs the West from the East (NJ, Philly, Boston, Montreal, Leafs, Panthers, Hurricanes, and Rangers). The AVS are 11-5-1 vs the East.

In the West, 5 teams sit 5 or less points out of the playoffs. It's wide open. In the East it's a little more comfortable as only 3 teams are that close to the post season, and it doesn't look like it will get much more crowded. Carolina is once again making a big push, but they lost so much ground earlier in the season with Cam Ward being injured that they're still a long ways off. Both the Islanders and Panthers don't appear to be serious contenders either. And the Maple Leafs, well at least they'll get a high draft pick, oh, wait......bummer. Whereas in the West, all but two teams (Oil & BJ's) are still serious contenders. So long as the Wings miss the playoffs and the AVS make it, the 2010 season will be a qualified success.

My unqualified playoff predictions after the jump.

If you're still reading, you must be as bored as I am with no Avalanche action to be found. Here's my worst guess as to where teams will finish up the regular season. If I'm even remotely close, expect to hear about it for months. If I'm way off, we never has this conversation.

Eastern Predictions (as if we even really care):

1. Washington Capitals - they're #1 in the whole league and they keep getting better.

2. Pittsburgh Penguins - NJ is fading despite being Kovalchucked, and the Pens are still the defending champs.

3. Ottawa Senators - yes I'm going bandwagon here, but the Sabres have been over performing all year thanks to Ryan Miller.

4. NJ Devils - they're still tough and Brodeur makes anything possible.

5. Buffalo Sabres - The Sabres need more consistent offense, but still have a solid line up.

6. Philadelphia Flyers - This team has everything they need to contend for the cup except for a big hole in goal - props to Leighton for his amazing work, but it's hard to imagine him keeping that up for an extended run.

7. Tampa Bay Lightning - I may be crazy, but I think Stamkos is pushing his entire team to pick up their game and join him in the post season.

8. Boston Bruins - Lots of inconsistency all year, but things seem to be settling and their experience should prevail.

On the Bubble: New York Rangers.

1. Chicago Blackhawks - Their young legs will help them finish strong.

2. San Jose Sharks - Will enter the playoffs with less pressure at the #2 spot.

3. Colorado Avalanche - The AVS are tied for the NW lead right now and will button down the hatches the rest of the way.

4. Los Angeles Kings - They have been good all year and are getting hot at the right time.

5. Vancouver Canucks - All the pieces are there, but the younger teams in front of them look hungrier (excluding the AVS abysmal Saturday night).

7. Calgary Flames - They should be so much better.

8. Anaheim Ducks - Say what you will, but they always seem to find a away. Selanne and Niedermeyer are old and this is there last shot probably. They will go all out.

On the Bubble: Wings, Preds, Stars. The last two spots in the West are totally up for grabs. The Preds may edge out the Flameouts, and the winged wheel (never capitalize that shit) should make it, especially after getting key players (Franzen, Holmstrom) back from lengthy injuries, but I just don't have the heart to give them any love - Valentine's Day be damned! My fingers are physically incapable of typing it.

Let's hear your predictions in the comments section below. Winner gets a Pony keg of diet Mountain Dew courtesy of fan favorite Tyler Arnason.

PS - the AVS' next game is at home March 1st vs the Dead Things. Hell of a way to welcome us back boys!! Every game from here on out is huge. Go AVS.