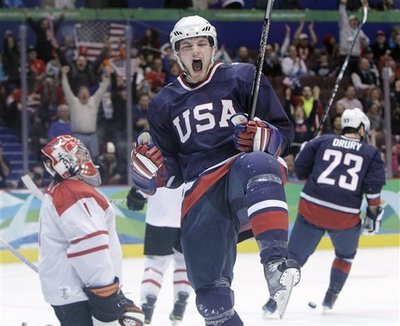 Ah, the first day of Olympic hockey. U.S. v Switzerland and Canada v Norway (Russia v Latvia is also 'today' but late enough that I consider it a tomorrow game). The first game saw the U.S. beat the Swiss by a score of 3 to 1. You may be thinking, only 3 to 1? What's up with that USA? But, really, the Swiss team is very good. The only big names they have on their roster are Jonas Hiller and Mark Streit but the team is excellently coached and play their system very well. The U.S. is clearly still working out kinks, as well. The goals for USA were mostly individual efforts as evidenced by the fact that of the three goals, two were unassisted.

The first goal, near the end of the first, was generated by some good pressure by the U.S. The Swiss turned it over while trying to clear and Bobby Ryan scored on a nice wrist shot from the slot. The next goal came off a sweet end to end rush by David Backes. The Swiss had a great chance in front with Ryan Miller scrambling but Backes swooped in to grab it, flew up ice, cut around the Swiss d-man from the outside and went right through the crease before tucking it home. Ryan Malone scored the final goal for the U.S. by poking home a loose puck after a Ryan Suter point shot. The Swiss scored later on the powerplay when a centering feed by Roman Wick kind of rolled off Miller's stick and over his pad into the net.

As far as individual play, I thought that Roman Wick was great for the Swiss and deserved the goal he got. Hiller was decent but 3 goals on 24 shots isn't great. Miller didn't have to work too hard. The Swiss' lack of scoring was actually more to do with them missing shots. Paul Stastny is centering Patrick Kane and Zach Parise on what should be an awesome line. They were clearly still testing each other out, though, and had no points. Former Av Chris Drury didn't have much ice time but he made the most of it, getting a couple shots on net, generating some pressure and hitting some people. He was part of the forecheck that led to the first goal by Ryan. Ryan, Drury and Ryan Callahan (so many Ryans!) played together a couple of shifts and I thought they looked good. All and all, it was a good game for team USA. I think they'll only get better as the tournament goes on.

As for the Canada v Norway game, I only really watched the 2nd period. The first was mostly taken up by Women's Curling (which I didn't mind because it was an awesome match between the U.S. and Japan) and by the time it was clear that Canada was going to demolish Norway, I lost interest. Jarome Iginla was the big hero, breaking a 0-0 tie a few minutes into the 2nd. After that, Canada scored 7 more goals and Roberto Luongo got the shutout. Only thing I am confused about is the fact that Brent Seabrook recieved half the ice time of Duncan Keith. If they're not going to be defensive partners, why pick Seabrook over Mike Green? Avs prospect Jonas Holos (who, according to NHL's Impact magazine, plays for Jonas Holos) had nearly thirty minutes of ice time but also had a team worst -4. Having a lot of ice time against players like Sidney Crosby might help his development though.

Tomorrow Ruslan Salei and Peter Budaj (likely as a backup) are in action as is Peter Forsberg.