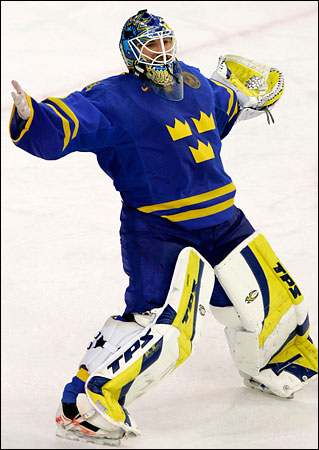 Thought I'd throw this up mostly for discussion on today's games as I did not watch the Russia/Latvia game or the Finland/Belarus game. I've heard that, despite the lopsided 8-2 score of the Russia, Latvia game, Latvia was actually pretty impressive against the stacked Russian team. People are saying Russia's weakness is its defense, which may be true, but has Evgeni Nabokov ever won anything big? People are always harassing Joe Thornton and Patrick Marleau about the Shark's problems in the post season but Nabokov was underwhelming last year as well. It will be interesting to see if Ilya Bryzgalov gets any starts.

Finland, of couse, beat Belarus pretty handily, 5-1. I still don't think Finland can match up to Canada, Russia, Sweden or even the U.S. but they smacked around Belarus pretty good here. I didn't see it myself but I guess the announcers ripped Ruslan Salei apart for his performance. Surprisingly, Salei did not lead Belarus in ice time. He was also a -1.

This is the only game I got to half watch. I really wanted to see this game but Wednesdays are not good for me. I don't know whether to root for Sweden or not. Peter Forsberg is on the team as well as Henrik Lundqvist, my favorite goalie not named Craig Anderson. Yet there are four Wings players on the team as well...Anyway, the game was suprisingly (to me at least. Is Germany supposed to be good?) even with the Swedes outshooting the Germans only 25 to 21 and beating them 2-0. Looking at the rosters of each team, Sweden should have kicked the crap out of Germany. Like I said, I only half watched the game and Sweden didn't look bad to me...but Marco Sturm is most well known player on team Germany. Forsberg didn't have any points and only 13 minutes of ice time but it was cool to see him out there. I did manage to see his interview and he seemed happy just to be playing again. Screw it, I can't root against Forsberg no matter how many of the wretched Wings may be on his team.

I leave you with a question. I'll try and get one of these up everyday. Would you rather I put them up like this, in the evening to discuss the late game from  the night before, and then the afternoon and evening game OR have me post it in the morning to discuss all the games from the previous day?