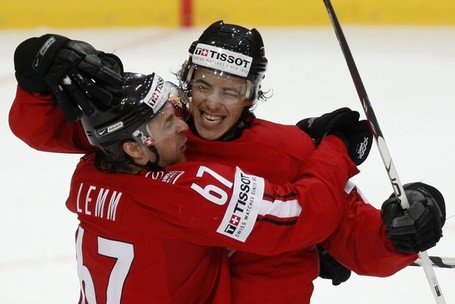 Wow, yesterday was quite an exciting day for hockey fans, eh?

First up was the United States facing Norway. The final score of 6-1 is a little deceptive as it was only 3-1 until the final minutes of the third period. It was a good game for the USA but they are having serious problems with the defense pinching in at inopportune moments. Ryan Miller only faced 11 shots but quite a few were excellent chances coming of odd man rushes. On the flip side, I thought the offense was great. The line of Phil Kessel, Joe Pavelski and Ryan Malone is outstanding. I also like the David Backes, Chris Drury and Bobby Ryan/Ryan Callahan line. The other lines are a little different. Zach Parise, Paul Stastny and Patrick Kane are good but should be better. Parise had two assists, Stastny one assist, and Kane had a goal. Not bad but Ron Wilson busted up the line in the 3rd period after a poor 2nd perod effort by the team. He slotted Parise's teammate Jamie Langenbrunner on the right wing in place of Kane. I guess because they are linemates in New Jersey because Langenbrunner has not earned a place with them with play. His line with Dustin Brown and Ryan Kesler has dissapointed so far. I was expecting Kesler to be the number 2 center after Stastny but Pavelski and Drury have outplayed him by a large margin thus far. I'd also like to give props to Jack Johnson. A lot of people doubted he belonged on the team but he has had two strong games. Avs prospect Janos Holos was playing for the Norwegians and, damn, he's not bad. He led the Norwegians in ice time (28:15) and managed to skate away with a +/- of 0. He's not big or noticable really, but he plays a smart,  positionally sound game. I am pretty impressed. I wouldn't mind seeing Holos get a shot with the Avs next year.

Moving on to the Canada, Switzerland game. If your not Canadian, this game was the funnest to watch of the tournament thus far. Canada had a 2-0 lead in the 2nd period but then Jonas Hiller shut the door and the Swiss team fought their way back to tie it. Canada won 3-2 in the shootout. I bet Hiller will get credit for forcing the shootout, which he deserves, but the Swiss rarely looked overmatched. Right up until the end of OT they were getting quality chances. Roman Wick (pictured above) and Hnat Domenichelli were both very impressive for the Swiss. The only Canadian who impressed me this game was Sidney Crosby. He started really forcing the play after the Swiss tied it up and even had a great scoring chance after getting whacked in the face with a highstick (bad missed call by the refs). He also scored the game-winning shootout goal. This is only going to make Sunday's game against the USA more intense as the U.S. is now the only team in group A to have gotten all possible points thus far.

Finally there is the Slovakia, Russia game. I didn't start watching this game until after Marian Hossa tied up the game in the 3rd period. Slovkia went on to upset the Russians in a shootout 2-1. Jaroslav Halak and Ilya Bryzgalov (who I thought might start) look like they had strong games. Looks like the Slovakians played a very good defensive game to shutdown the highpowered Russian offense. Zdeno Chara looked great during what I watched.

Wow, two Gold Medal favorites forced into a shootout by teams most didn't even predict to medal. I loved it but then I always love an underdog. Both teams do not play until Sunday and both are facing tough teams in the U.S. and the Czech Republic. It'll be interesting.

Today's games are: Belarus v Sweden (12:00), Czech Republic v Latvia (16:30) and Finland v Germany (21:00). All times are pacific standard. None of these games are in much doubt. Sweden, Finland and the Czech Republic should all remain undefeated but after yesterday who knows? Live blog to go up at noon, mountain time.