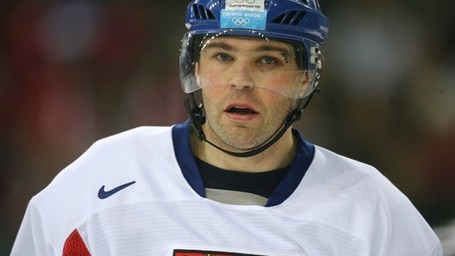 Sweden had another close game against a relatively weak opponent. They won by a final score of 4-2 but that includes an empty net goal in waning seconds of the game. They were up 3-0 but Belarus' Dmitri Meleshko scored twice. Good news for the Swedes is that they have a lot of depth, no forward played less than 13 minutes, and are very good defensively. Also Jonas Gustavsson was playing instead King Henry so the two goals by Belarus aren't as worrying. People are wondering what is up with the Swedes offense but I doubt they ever wanted games to turn into high scoring affairs. If they can shutdown the dynamic offense of Russia and Canada (and I think they can) Sweden has a shot at another gold medal. Ruslan Salei led Belarus in ice time but I didn't see the game so I can't comment on how he played.

The Czech Republic had a similar game against Latvia. They jumped out to a quick 3-0 lead and dominated the first period. The second period was a little more even, but the Czech's managed to score again before Latvia scored twice. In the third period the Latvians fought hard to tie the game but the Czechs were back in the game and scored the only goal, an empty netter, to bring the final score to 5-2. The Czech Republic is good. They took their foot off the gas after going up 4-0 but most teams do, even against better teams than Latvia. I am really looking forward to the Czech Republic's game against Russia. Jaromir Jagr vs Alexander Ovechkin. Awesome.

The last game was Finland vs Germany. DId not see this game but Finland dominated and beat Germany 5-0. Both Ruutu brothers scored which just...stomach turning. I hate those two. Finland is showing that they are not to be taken lightly. I believe they now have the best goal differential in the tounament at 10-1. Germany has yet to score a goal, I believe, which must really suck for Germany's fans. Maybe they are contenting themselves with the 13 medals they have won so far in these Olympics.

With apologies to Slovakia, today is kind of a weak day for Olympic hockey. At 12:00, Switzerland and Norway face off, Latvia and Slovakia have the next game at 4:30 and the last game is between Belarus and Germay at 9:00. All times pacific standard.