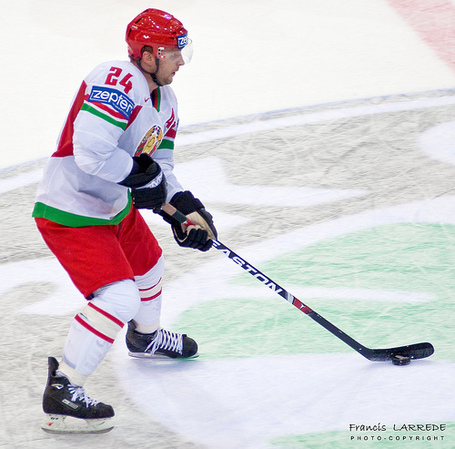 In the first game yesterday, Switzerland defeated Noway 5-4 in OT. Roman Wick was great for the Swiss and Tore Vikingstad had a hat trick for Norway. Janos Holos played almost 30 minutes again and again was very good. I think we got to see more of his offensive instincts in this game. He did give up a penalty shot for covering the puck in the crease but he saved a sure goal in doing so.

In the next game, Slovakia creamed Latvia 6-0. At just five points they won't receive a bye into the next round but it would be foolish to consider them anything but a medal contender. Jaroslav Halak has been great as has Marian Gaborik.

The last game today saw Belarus defeat Germany 5-3. Belarus was up 3-1 in the third period but the Germans managed to tie the game. Ruslan Salei then scored a powerplay goal to break the tie and lead his team to victory. It must have been very frustrating for the Germans as they outshot Belarus 40-17. Thomas Griess gave up 5 goals on the 17 shots for an abyssmal .706 save percentage.

Today is a great day for Olympic Hockey. The Czech Republic and Russia face off at 12:00 followed by the USA taking on Canada at 4:30 and finally Finland will meet Sweden at 9:00. Five of these six teams come into tonight undefeated: Czechs, Fins, Swedes, Americans and Canadians (who won one game in a shootout getting only 2 of 3 possible points). Russia was defeated by Slovakia in a shootout but is still considered a favorite to win gold.