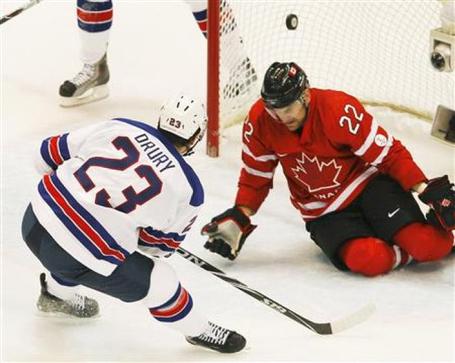 Holy Hell, what a great day for hockey.

First up was Czech Republic against Russia. The first period was fantastic with Evgeni Malkin scoring for Russia on the power play (on an awful call on Jagr due to Pavel Datsyuk's assholery, do they put something in the water in Detroit?) and Tomas Plekanec scoring for the Czech Republic on a 5 on 3. Alexander Ovechkin was hitting everything that moved. The 2nd slowed down some and the only goal was scored by Viktor Kozlov. Malkin scored his 2nd early in the 3rd. The Czech's mounted a desperate comeback and Milan Michalek scored to make it 3-2 but Pavel Datsyuk scored an empty net goal to seal the win for Russia and give them a bye into the next round. I have say I agree with Eddie Olczyk when he say that Jagr should be playing with Plekanec or at least David Krejci.

Next up was Canada vs the USA. It's hard to capture the emotion of this game. USA pulled out a 5-3 win and peope are calling it the biggest upset since the Miracle on Ice. While this is totally ridiculous, it does show how emotionally invested people were in this game. It started off with Brian Rafalski (who scored the last two goals in the Norway game) scoring in the first minute of the game. Canada fought back and Eric Staal tipped one past Ryan Miller. Shortly thereafter, Martin Broduer tried to bat the puck out of the zone, Rafalski got the turnover and scored. The U.S. escaped the 1st 2-1 with Miller making 18 saves on 19 shots. In the 2nd Dany Heatly found himself alone in front of the net tied it up. Then Mr. Clutch himself, Chris Drury, scored for the U.S. to give them back the lead. I have to say, I am loving that Drury is shoving it in the face of every person who thought he didn't belong on this team. In the 3rd, Rafalski banked it off Jaime Lagenbrunner's skate and in on the power play to give the U.S. a 4-2 lead. After this, the Candians went nuts trying to tie the game but Ryan Miller was up to the task. Sidney Crosby gave Canada some hope by scoring on the power play with about three minutes left but Ryan Kesler on, an amazing play, reached around Cory Perry and one-handed the puck into the empty net. For the U.S. Ryan Miller was, of course, amazing with 42 saves. Ryan Kesler and Dustin Brown hulstled all night and made some great defensive and offensive plays. Chris Drury was fantastic. His ice time has gone up every game (14:18 tonight) and he's gone from a 13th forward to the 3rd center. Zach Parise and Paul Stastny both made excellent decisions with and without the puck and I thought that Stastny was especially good in his own zone. Ryan Suter, Jack Johnson and, obviously, Brian Rafalski were ridiculous on defense. Going over to Canada, I thought Rick Nash and Sidney Crosby had good games. I lot of people will blame Martin Broduer for this loss but, while he wasn't great, only the 2nd goal was really his fault. Miller certainly outplayed him, however, and I wouldn't be surprised to see Roberto Luongo get the next start. What a game. If these two meet again, it will be epic.

Finally there was Sweden vs Finland who both came in having gotten all possible points thus far. Sweden dominated all night long and Henrik Lundqvist barley had to work to earn his shutout. Nicklas Backstrom had a goal for the Swedes and Loui Eriksson had two to give them a 3-0 win. The result would have been much worse but for Miikka Kiprusoff. The Fins failed to score during five consecutive power plays including a very poor 5 on 3. It was bad for the Fins but also dangerously undiciplined by the Swedes.

USA, Sweden, Russia and Finland finish as the top four, in that order and will recieve byes into the next round. Since USA finished first, they won't have to face any of the Big Seven in the quarter final match.

No games today. Qualification matches are on Tuesday.