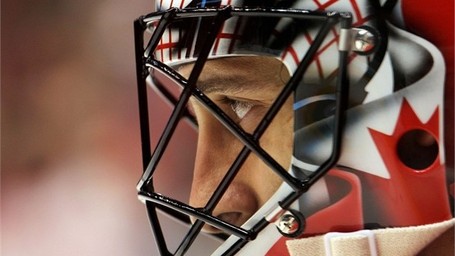 This is gonna be quick since I have a midterm this morning.

Switzerland beats Belarus in a shootout, 3-2. The game was great fun to watch. Hiller was crap for the first half, let in two weak goals. He's gonna have to be insane for Switzerland to have a chance to upset USA.

Canada stomped Germany 8-2 but tomorrow they face a team that's a little better. I think its safe to say that it will be the most important game so far in Roberto Luongo's career. It's make or break time for Canada.

Czech Republic had a real tough time with Latvia needing OT to win it 3-2. Latvia scored two in the last half of the 3rd period. The Czech's put 50 shots on net. I didn't see this game. Was the Latvian goaltender playing out of his mind?

Slovakia takes out Norway in another surprisingly close game, 4-3. Again, I didn't see it so I have no idea what happened. I saw Tore Vikingstad scored again. Nice to see him living up to that name of his.

So, to wrap up. Lots of almost upsets today, but pretty much whoever was expect to win, won.

Today, USA v Switzerland at 12:00, Russia v Canada at 5:30, Finland v Czech Republic at 7:00 and Sweden v Slovakia at 9:00. Canada v Russia is the game to watch but I also find myself very intrigued by the Sweden, Slovakia game.