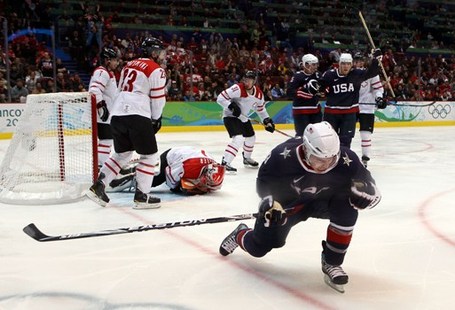 First up was the U.S. vs Switzerland game, 2-0 for USA. This game might have been fun to watch from an objective point of view but I was tense and worried the entire time. Switzerland is good. They clog lanes and stand up at their blue line as good as any team in this tournament and better than most. . Their penalty kill is work of art. And then there is Jonas Hiller. 42 saves, 1 goal against. For the U.S. it was Zach Parise who saved the game. He was buzzing all night and his line with Paul Stastny and Jaime Langenbrunner was the best for the USA. He finished with 2 goals, 1 post, and the graditude of every person rooting for USA. Ryan Miller only had to make 18 saves but the Swiss had some great oppertunities. Chris Drury, Ryan Callahan and Ryan Kesler were great defensivley. Ryan Suter continued his stellar play and Phil Kessel created quite a few chances. But where art thou Patrick Kane?

Canada 7, Russia 3. This game has and will be analyzed ad nauseum so I'm not gonna say anything but that I doubted from the start that Evgeni Nabokov could carry the Russians to gold. When he started the 2nd period my eyes popped out like an f'ing looney toon. Honestly, not only should Ilya Bryzgalov have started the 2nd period, he should have been the starter for Russians the entire tournament.

Just like the U.S. game, Finland and Czech Republic went into the 3rd scoreless. And the Fins scored 1 power play goal and 1 empty net goal to win 2-0. Tomas Vokoun and Miikka Kiprusoff were both brilliant but it was Finland who the hockey gods smiled on. Pavel Kubina's helmet got knocked off and had to leave Niklas Hagman alone in front of the net to retrieve it becuase of international hockey rules. Hagman scores and Finland moves on.

Slovakia upsets Sweden 4-3. Henrik Lundqvist set a new record shutout streak, then got scored on 4 times. Slovakia always was a dark horse to medal and now they have their chance. The Swedes just looked kind of disinterested this game. They have to be really dissapointed in Nicklas Lidstrom who was a non-factor. Henrik Zetterberg and the Sedin twins were also underwhelming. Pavol Demitra and Marian Gaborik are tearing it up for Slovakia.

No men's hockey today but U.S. women's team is facing the Canadien women in the gold medal game and Finland faces Sweden in the bronze medal game.