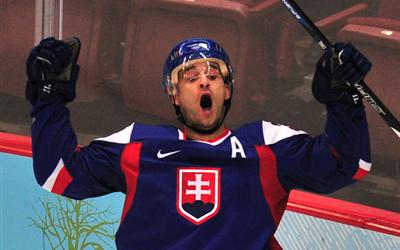 It's semi-final time, with USA and Finland facing off at 12:00 and Canada and Slovakia at 6:30. Times are pacific standard.

In the U.S. Finland game, it's going to come down to goaltending. Ryan Miller and Miikka Kiprusoff have been magic for their teams thus far. The U.S. is younger and faster. Zach Parise is the driving force of this team and Brian Rafalski and Ryan Suter are doing an admirable job, despite the U.S. defense being constantly maligned. But Finland has the experience. Several of the members of this team were on the Finnish team that won silver in Torino. It should be a fun, close game.

In the Canada, Slovakia game, Canada is certainly the favorite. But so was Russia, and so was Sweden. Make no mistake, the Slovaks aren't intimidated by anyone. Marian Hossa and Pavol Demitra are the scoring leaders of this team and Marian Gaborik is starting to pick up his pace. Jaroslav Halak has been great and, apparently, they have some old coot named Ziggy Palffy who is pretty good at this hockey thing. If the Canadians come out like they did against Switzerland or the U.S. they will lose. But if they can play like they did against Russia, it's hard to imagine them losing to anyone. Jonathan Toews has been everything for Canada Patrick Kane has not for the USA, with 7 assists and a +/- of 9. Dan Boyle was excellent against Russia. Roberto Luongo has steadied the goaltending position. This is one of the more unpredictable games so far. It all depends on Canada and whether we see the team that beat Russia 7-3 or the team that edged Switzerland 3-2 in a shootout. If Canada plays anything less than their very best, Slovakia will make them pay.