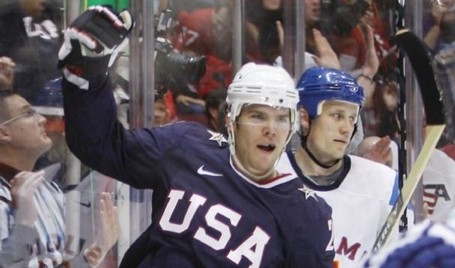 And the gold medal game will be between the USA and Canada. It was inevitable wasn't it?

The Finland vs U.S. game was over almost before it started. The USA scored 6 goals in the first 13 minutes of the game. It started when Miikka Kiprusoff made a bad pass. The puck was being chased into the Fin's zone by two Finnish defensemen and Phil Kessel. Kessel was hustling and forced Kiprusoff to come out and play it. He made a great pass to Ryan Malone who popped it into the empty net. Thanks Kipper! Then Dustin Brown (who went pointless but had a great night) drew a penalty and Paul Stastny made a beautiful cross-crease pass to Zach Parise for the next goal. Then Erik Johnson scored. The Finnish coach called a timeout but failed to pull Kiprusoff. When he was scored on by Patrick Kane seconds later, he pulled himself. Niklas Backstrom came in relief but Kane quickly scored another goal and then Stastny got it in the slot and roofed it to make it 6-0 with 7:14 left in the first period. After that, things settled down and the U.S. played defensively the rest of the night. Jarkko Ruutu pulled his usual crap and "fell" on top of Ryan Miller (who was excellent with 18 saves) earning himself a ten minute misconduct and always creepy Olli Jokinen took a slash at Kane. But even though I was worried the Fins might start getting nasty, that was about the extent of it. With 12 minutes left and USA going on the power play, Miller was pulled so Tim Thomas could some ice time. Smart move by Ron Wilson. Taking Miller out makes sure he won't get injured during a game that's already in the bag. Finland scored on the power play, bringing the score to 6-1. It was deflected in by Erik Johnson who looked suitably chastised. Wilson played this game smart. Brian Rafalski, Ryan Suter and the Parise, Stastny, Jaime Langenbrunner line all got limited ice time to keep them fresh for Sunday. And they are going to have to be at their best since...

Canada edged Slovakia in the other semi-final game, 3-2. Canada pretty much dominated this game through the first two periods, limiting Slovakia to just 9 shots. Patrick Marleau and Brenden Morrow scored on tips and Ryan Getzlaf scored on the power play. It was 3-0 going in to the 3rd but Slovakia's good defensive zone play and Jaroslav Halak's solidness kept the game within reach for a Slovakia. Slovakia was great in the 3rd, outshooting Canada 12-7. Lubomir Visnovsky and Michal Handzus scored late to make it 3-2. Despite a lot of pressure and an extra-skater, Slovakia could not tie it up though Pavol Demitra came within a hair's breadth. Certainly no reason for Slovakia to be ashamed of their effort this game.

Today is the Bronze medal game between Slovakia and Finland at 7:00 pacific standard time. I've no idea who'll win this game but I hope its Slovakia.