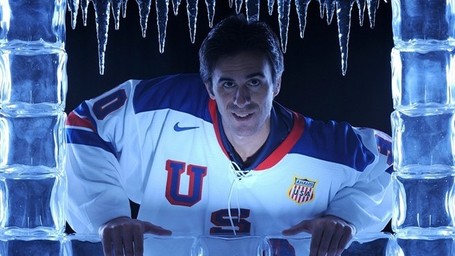 Last night, Finland took the Bronze medal, giving Ville Peltonen and Jere Lehtinen and I believe one other (if you know who, let me know in the comments and I'll update this) their fourth medal which ties an Olympic record. That is pretty cool but I really feel like Slovakia deserved to win a medal. After going down 1-0, Slovakia scored 3 unanswered goals. In the third, the Fins answered, especially Olli Jokinen who scored the 3rd and 4th goals for Finland. Slovakia had a few chances to tie it up in the last minute scramble, Richard Zednik in particular had a glorious chance that he bounced of Miikka Kiprusoff's head. Finland scored an empty net goal to seal the deal.

And, today, at 12:15 pacific standard time, the USA will take on Canada for the gold. They've taken different paths to get here with the USA going undefeated and actually never even being down a goal. Ryan Miller has been the man each and every game. The Zach Parise, Paul Stastny, Jaime Langenbrunner line has been dominant and Brian Rafalski has perhaps been the surprise of the tournament (its strange to think he could be my hero today and an enemy tomorrow). Canada has faced a tougher path, falling to the USA in the preliminaries and having to play in the qualification round. But the loss to the U.S. team was a wake-up call. Martin Brodeur lost his starting job to Roberto Luongo who has been solid if unspectacular. The team shifted lines around and found some better chemistry. They tourched Russia but then had trouble with a Slovakian team that just lost to the Fins, who, of course, were tourched by the USA. I still think Canada is the favorite but anything could happen. A lot is going to depend on that man pictured at the top of my post. He has been rock solid and could steal away the medal that the Canadians are so desperate for. Who will step up for the USA? Will it be a young kid like Patrick Kane, Zach Parise, Stastny, or Phil Kessel? Does Captian Clutch Chris Drury have another huge goal in him? Will Brian Rafalski challenge for tournament MVP? Can the USA avenge their loss at Salt Lake? And for the Canadians, will Joe Thornton finally buck his reputation for folding under pressure? Will Sidney Crosby grab another trophy that Alex Ovechkin does not have? Can Luongo follow in Broduer's foot steps and bring gold to his country? Did somebody stick another damn loonie under the ice?