As discussed last week, the AVS success can be directly attributed to three main aspects: Craig Anderson, The Young Guns, and the coaching staff. We recently brought you stories on Andy and the Rookies, and today we'll take a closer look at the architects behind this season's winning campaign: the coaching staff.

It's strange to say that the AVS' front office did a good job hiring the coaching staff because it was such a mess this past summer. The job was first offered to, and turned down by, Roy. Then the AVS' brass performed a total and complete house cleaning of the Granato era staff. Finally, they executed a seemingly (at the time) default/afterthought promotion of Joe Sacco (who?) from Lake Erie (where?). Granato, by the way, was a class act and deserves a lot of credit and respect for being so professional and not bad mouthing anybody - I wouldn't have been so nice. Hell, I showed more rage when I was 16 and got fired from Elitch's for stealing spoonfuls of Dip'n Dots in between customers. So I'm hesitant to give any too much credit to Lacroix and Sherman for the AVS current success. They may have got the right pieces in place (a dead monkey would have been smart enough to draft Duchene), but this season could very easily be the disaster it was billed to be if it weren't for Sacco & Company. 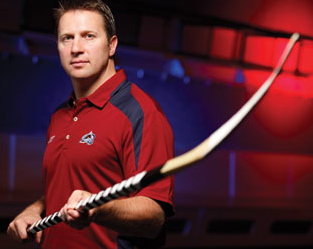 The Avalanche's other "Joe" is a Massachusetts native. He played college hockey at Boston University (like Avalanche player Yip, and prospects Shattenkirk, Cohen, Millan). He was a 4th round pick (71st overall) by the Maple Leafs in '87. He played Right Wing for Toronto, Anahiem (side note: he's actually pretty good on my Sega Genesis version of NHL '95), the Islanders, Washington, and Philadelphia, where he amassed totals of 94 goals and 213 points. He retired with Philly as recently as 2003 - which may have something to do with how well he relates to his players.

He made a name for himself with his dedicated play and commitment to hard work. Said Sacco: "I was an average player in the league (NHL). I found a way to survive through 700 games. I did it through hard work".

Last summer on June 4th he was named the fifth head coach in Avalanche history and the 13th in franchise history. Joe spent the last two seasons as head coach of Colorado’s American Hockey League affiliate, the Lake Erie Monsters. This season with the AVS marks Saccos' fifth season overall with the organization, as he also spent two years as an assistant coach with the AHL’s Lowell Lock Monsters in 2005-06 and Albany River Rats in 2006-07.

Sacco has been called "a player's coach" because players like playing for him. He lets them know exactly where they stand, what they are doing well, and what they need to improve on (see Wojtek Wolski). Sacco's approach may not suit everyone as we can see with Liles' frustrations upon being a healthy scratch time and time again, but it seems to work because Liles has rebounded well after being benched. Regardless, It is a testament to Sacco's coaching prowess that players who struggled and/or floundered under Granato and coach Q are now thriving, and that the players truly seem to believe in the system and are, for the most part, putting in the effort every night.

Fun Fact: He played on the same line with his brother David during his time with the Anaheim Mighty Ducks (they were still "mighty" back then). 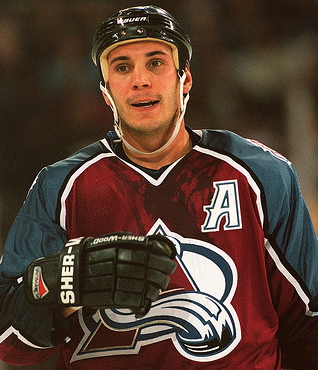 This is Sylvain's third season serving as an assistant coach under Sacco, and his first in the NHL. Sly played 14 NHL season's as a defenseman, retiring in 2003 like Sacco. His Avalanche pedigree is intact as his career highlight was as member of the burly 1996 championship team. In his career, he scored 30 goals and 184 points. He also was a glowing +108 for his career.

Fun Fact:  After the AVS won their first championship, Sly had his baby daughter Alexanne baptized in Lord Stanley's Cup, on his day with the cup. 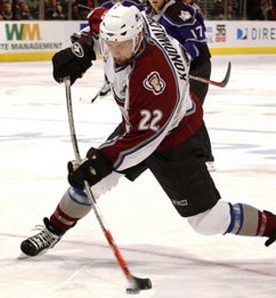 Only 36 years-old, Konowalchuk played 790 regular season games over 14 seasons with Washington (where he was captain) and Colorado. Sadly, Konowalchuk was forced into early retirement in September of 2006 when Long QT Syndrome was discovered during a routine health examination. His career numbers are: 171 goals and 225 assists. But beyond the numbers, Konowalchuk was a heart and soul player who always put his team first and was a very popular teammate.

Fun Fact: Konowalchuk is one of ONLY 2 NHL players to have been born in Utah. 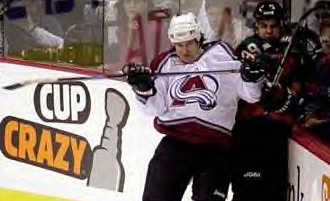 Like Knowalchuk, Deadmarsh was a heart and soul player who was also a fan favorite, and forced into early retirement for health issues. Deadmarsh cites his numerous concussions as the cause for stepping away from the NHL game. Deadmarsh scored 184 goals and 373 points, to go along with a hefty 819 PIMs in only 567 games over 9 seasons.

Deadmarsh also carries heavy ties to the Avalanche. He was originally drafted 14th overall by the Nordiques in 1993. He was traded to the Kings with Aaron Miller in the deal that brought Rob Blake, Steve Reinprecht, and subsequently the Avalanche's second Stanley Cup to Denver. Deadmarsh was a dynamic force on the ice. He boasted the rare combination of physical and skilled play. He was a clutch performer in international play, as well as in the NHL playoffs for both the AVS and the Kings (he led the Kings to a come-from-behind defeat of the Winged Wheel in the '01 playoffs - yet another reason to love him).

Fun Fact: Deadmarsh is reportedly the ONLY player to have his name misspelled and corrected on the Stanley Cup. 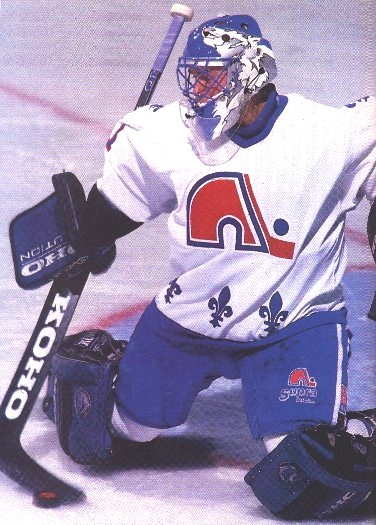 The coaches ties to the Avalanche organization continue to run deep. Drafted by the Nordiques 10th overall in 1993, Thibault was only the second 18 year-old to play regularly in the NHL at that time. Thibault also played a vital part in the AVS' first cup win as he was the goalie traded to Montreal as part of the package deal for Patrick Roy (now that's taking one for the team!). Despite his high draft status he never really solidified a strong or lasting #1 goalie position. His best year was in 2003 when he went to the All Star game for Chicago. But just two years later he was placed on waivers by Pittsburgh. He retired in 2008.

Fun Fact: Thibault has this weird distinction: he was the last goalie to win a game at the Montreal Forum, Maple Leaf Gardens and the Capital Centre. So basically, after he plays in a building it comes crumbling down. Beware.

Much like the the AVS players are Young Guns, so too are the coaching staff. Some of these coaches are younger than Foote. This proximity in age to both their playing days, and their players, situates the Avalanche coaching staff in an interesting and unique position: they understand the current NHL game. AND Sacco and Lefebrve's previous association with Lake Erie affords them an in-depth knowledge of, and familiarity with, the Young Guns. I believe it is these two attributes that have really helped Sacco & Co. form a balanced, dedicated team. This team is very representative of how both Sacco and Konowalchuk played the game: hard, fast, team-first, and totally committed. Think about this: how many times have you see the Avalanche beat the opposition to loose pucks this season as opposed to last year?

Trophy Watch: The NHL's Jack Adams Award is awarded to the coach who is "adjudged to have contributed the most to his team's success". SB Nation back on January 7th awarded Phoenix's (how the hell do you pluralize Phoenix??) Dave Tippet over nominees: Jacques Lemaire and our Joe Sacco. Adrian Dater also humped Dave Tippett's leg gave Tippet the edge over Sacco at midseason (he also picked Tavares over Duchene for the Calder - loyalties AD, loyalties!!). In all honesty, Dater was right giving Tippet the nod at mid-season, but it HAS to be a pretty damn close call. Where both teams finish up in the standings at season's end will sway the final consensus. Go AVS.