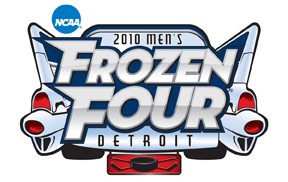 Three Colorado Avalanche prospects will participate in the 2010 NCAA hockey tournament, which starts today.  Defending champion, Boston University, failed to qualify for the tournament.  The winner of each of the four regionals will head to Detroit's Ford Field in two weeks for the Frozen Four.  Here's a quick look at each regional:

Denver was the regular season WCHA (Western Collegiate Hockey Association) champion and features two Hobey Baker finalists in Rhett Rakhshani (Islanders) and Marc Cheverie (Panthers).  Cheverie, is a native of Cole Harbour, NS and is good friends with NHL star Sidney Crosby, who is from the same home town.  The Pioneers, one of the favorites entering the season, stumbled in the WCHA Final Five and has lost some key contributors to injury.  It will be up to Cheverie and production from Denver's top line, featuring Rakhshani, Colorado native Tyler Ruegsegger (Maple Leafs) and Joe Colborne (Bruins), to advance to Detroit.

Rochester Institute of Technology (RIT) is making their first appearance in this tournament since moving up to Division I in 2005.  RIT won the AHA (Atlantic Hockey Association) championship to earn a spot in the tournament.  The Tigers enter the tournament on a 10 game winning streak.  Their leading scorer, with 45 points, is sophomore Cameron Burt.

New Hampshire won the Hockey East regular season title, but had to sweat it out to earn a tournament bid due to their loss in the conference tournament.  The Wildcats feature the fourth Hobey Baker finalist in this regional with Bobby Butler.  Butler is tied for sixth in the country in scoring with 50 points.  He'll also be one of the more sought after undrafted free agents and has admitted to being a Colorado Avalanche fan.

Boston College, who won the Hockey East Tournament in dramatic fashion over Maine, is making their 29th tournament appearance.  BC last won the NCAA tourney in Denver in 2008.  Colorado Avalanche draft pick, Paul Carey, was still playing in the United States Hockey League (USHL) at the time.  While the 2008 draft pick hasn't been a game breaker for the Eagles, he has doubled his point totals from his freshman season (9 to 19).

Alaska-Fairbanks is making their first NCAA tournament appearance.  This under the radar club will need all of it's defensive prowess to advance in this tournament.  The Nanooks are led by Alberta native Dion Knelsen.  The senior recorded 42 points in 38 games for the team.

North Dakota, like Denver, is seeking their eighth national hockey championship.  The notorious slow starters have won 12 of their last 13 games.  Coming off a WCHA Final Five championship, they come in as one of the hottest teams in the country.  Colorado Avalanche 2007 draft pick, Brad Malone, isn't leading the Fighting Sioux in scoring, but his impact is being felt.  Malone, cousin to Tampa Bay's Ryan Malone, is a feisty fore-checker and skilled penalty killer.  His offensive production has improved year by year and he enters the tournament with 25 points.

Yale is the regular season ECAC champion.  Gus Young, who is a 2009 Colorado Avalanche draft pick, will join the Bulldogs next year.  For now, the Bulldogs are concentrating on their fourth NCAA tournament appearance.  If Yale advances, it will be on the strength of their offense, which led the nation (4.09 goals per game).

Miami was the Central Collegiate Hockey Association (CCHA) regular season champion.  The RedHawks return to the tournament after Boston University beat them in the championship game nearly a year ago.  Miami is tied with Cornell for the best defense in the nation, allowing only 1.85 goals per game.  That effort named sophomore goaltender, Cody Reichard, a Hobey Baker finalist.  One thing is for certain, the Miami RedHawks are the most motivated team entering this tournament.

Alabama-Huntsville, playoff champions of College Hockey America (CHA), are the only team in the tournament witha losing record (12-17-3).  This is the second tournament appearance for the Chargers and it's not likely to be a long one.  Until the conference tournament, Alabama-Huntsville struggled in the regular season, winning just six conference games.  Cody Campbell leads the team in scoring with 22 points in 32 games.

Bemidji State was upset by Alabama-Huntsville in the CHA tournament.  However, the Beavers will be facing a different set of foes next season when it joins the WCHA.  BSU was a big surprise in the tournament last year as they advanced to the Frozen Four.  This year, the team is lead by junior forward Matt Read, who has 40 points.

Michigan has won the most Division I NCAA hockey championships with nine.  The Maize and Blue is hoping to capture its tenth title, after winning eight of its last nine games.  The Wolverines sport some nice scoring depth with junior Carl Hagelin (Rangers), Louie Caporusso (Senators), and Matt Rust (Blue Jackets).  It appears only a lack of focus will slow this team down.

Wisconsin finished second behind Denver in the WCHA regular season standings.  Like Denver, the Badgers feature two Hobey Baker finalists:  Brendan Smith (Red Wings) and Blake Geoffrion (Predators).  Geoffrion is the grand-son of former Montreal Canadien Bernie "Boom Boom" Geoffrion.  Wisconsin can score in bunches.  They received strong contributions from Michael Davies and Derek Stepan (Rangers).  Stepan, if you will recall, was one of the major cogs in the US Under-20 team that won the gold medal in January.

Vermont managed to squeeze into the tournament with some help, but beating Hockey East regular season champ New Hampshire in the conference quarterfinals was certainly a factor.  Vermont is one of three Frozen Four teams from 2009 to return to the tournament.  How much offense the team can generate, will determine as to how far they will advance.  The team was led by senior Brayden Irwin, who has 34 points.

St. Cloud State has made seven previous tournament appearances and has yet to win a game.  The Huskies can score with the likes of Ryan Lasch and Garrett Roe (Kings).  Yet, if goaltender Mike Lee (Coyotes) can play in this tournament, as he performed against the Badgers in the WCHA Final Five, the Huskies could be headed to Detroit.

Northern Michigan is making their first tournament appearance since 1999.  The Wildcats are led by junior forward, and Burnaby, BC native, Mark Olver.  Olver is a Hobey Baker finalist this season and was drafted by the Colorado Avalanche in 2008.  Olver was named to the All-CCHA First Team for his regular season performance, but had a relatively quiet semifinal and final in the CCHA tournament.  He will need to pickup the production for the Wildcats to advance.

The ESPN family of networks will be televising the tournament.  If you do not have access to ESPN360.com, you will only be able to view some games on tape delay.  You can find a tournament bracket, times, and complete tv schedule over at USCHO.