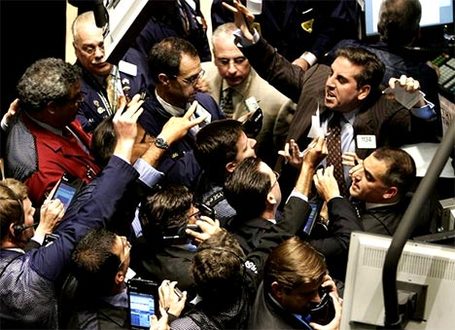 Today is day - the NHL trade deadline. Between now and 3pm Eastern, 30 teams around the NHL will be buying and selling assets in a frenzy of deadline deals. Some will be adding players to gear up for the final five weeks of the season (and, hopefully, the playoffs). Others will be trying to move extra players for future assets. Last year, there were 22 deals on deadline day, and the Avalanche were involved in one - Jordan Leopold for Ryan Wilson, a 2nd and Lawrence Nycholat.

How busy will the Avalanche be this year? Will they simply sell off some players on expiring contracts, such as Ruslan Salei and Marek Svatos? Will they find a taker for John-Michael Liles and his $4.2 million salary? Will the Avs go old school and surprise everyone with a splashy deadline trade? We'll know the answer to these questions over the next 6 hours.

The MHH team will be around all day today and we'll be updating this post as any Avalanche-related moves (or rumors) come across the wire. We'll also have a post up pretty quickly with analysis of any Avalanche deals.

There are a ton of resources we'll be monitoring throughout the day. Here's a few of the big ones:

TSN's Tradecenter and Sportsnet's Hockey Central are both great resources.

SBN again has a trade deadline hub with all sorts of analysis of trades as they happen.

Puck Daddy has a nice widget up that grabs the Twitter feeds of a bunch of NHL writers.

Adrian Dater will obviously be a big source of Avalanche news today, both via his blog and his Twitter feed

The moves so far (updated throughout the day)

Ryan Stoa has been recalled from Lake Erie. Brandon Yip out 4-6 weeks

If Wolski were to be traded to Phoenix, Mueller and something else would obviously be involved. Phoenix has been shopping Mueller. Hard.

Wolski is by no means fire sale and not guaranteed to be moved but if u look at long-range salary implications, Avs are exploring options.

Bruins asked about Wolski, but Avs would want first-round pick for him. Unlikely

Svatos to Phoenix is a possibility.

Other news/trades/signings of interest to MHH from around the league:

Another former Avalanche defensman is on the move: Derek Morris is set to return to Phoenix. The former first round pick is being traded for a 4th round pick. How the mighty have fallen....(in all fairness, he was never that mighty).

The Penguins send Former AV Martin Skoula (traded as excess) along with prospect Luca Caputi to Toronto to join former AV Jeff "the" Finger in the press box, all for the Leaf's Alexi Ponikarovsky. Skoula then was moved by Toronto to New Jersey for a 5th round pick.

Former AV Jordan Leoprone Leopold has been traded by Florida to Pittsburgh for a 2nd round pick.

The KHL says they will try to lure Ilya Kovalchuk to the KHL this June when his NHL contract expires. Just imagine their sales pitch: "Hey Kovi, come play with us! It's cold as shit and you can be linemates with Trailor Arnason!" Or maybe, "Russia: at least it isn't New Jersey".

Yan Stastny will be joining his brother in the NW Division. Stastny has been traded to the Vancouver Canucks for Cedric Labrie.

Avs rumored to be on the trading block:

And when the dust settles on all of this, we'll have a pregame thread up late this afternoon.