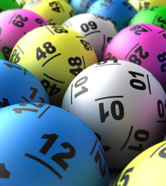 If you're like most Avalanche faithful, you probably forgot about the draft lottery drawing today. That is actually good news, it means we have PLAYOFFS to think about! Today's lottery drawing applies to the teams who's final standings are set, meaning only non-playoff teams - but who cares! The Avs are in the post season!

While today's drawing has no impact on the Avs now (they could trade up for a pick if there is a player that Greg Sherman has a crush on), it will play a huge part for many teams looking to rebuild or retool their identities. The biggest winners in my opinion are the Bruins. So long as they hold on to that #2 pick, they are sitting pretty. Either Tyler Seguin or Taylor Hall project to be franchise players and adding either one will erase any lingering heartache over the Phil Kessel trade. The B's missed Kessel's scoring this year, but look to upgrade this with that #2 pick from Toronto.

How it works: No team can move up more than 5 spots in the lottery. Meaning, the only 5 clubs who could pick #1 are (in order): Edmonton, Boston (from Toronto), Florida, Columbus, & the New York Islanders. This means if a team outside the bottom 5 wins the drawing, Edmonton would receive the first pick, which improves their odds for picking first to 48.2 percent. Science isn't an exact science with the NHL, and besides, math is wicked boring.

Here's a chart for each team's odds of winning the lottery: 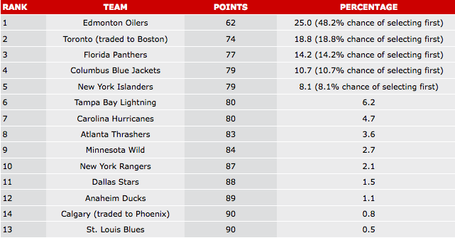