Share All sharing options for: Game 78 Preview: Sharks at Avalanche

It's Easter today and I was considering doing some lame thing involving the Avs resurrecting their playoff hopes and stuff, but I decided against it. So, forgot I brought it up. Let's just focus on the fact that the Avalanche are still in the driver's seat, even though they've lately been driving like my mother (trust me, it's not pretty).

I'm using comedic license there (and using the word "comedic" rather liberally here as well), because the Avalanche have actually been playing pretty good hockey of late. They could have easily beaten San Jose last Sunday, they played well in the early going against Anaheim before turnovers did them in and the Calgary game on Friday may have been the best all-around game the team has played in months. If the Avalanche can keep repeating that effort, the wins will start coming.

If you're the worrying kind, you can keep an eye on the Flames against Chicago at 3pm eastern today, but I, for one, am not thinking about the Flames. I'm just rooting for Avalanche wins.

And yes, I still believe. 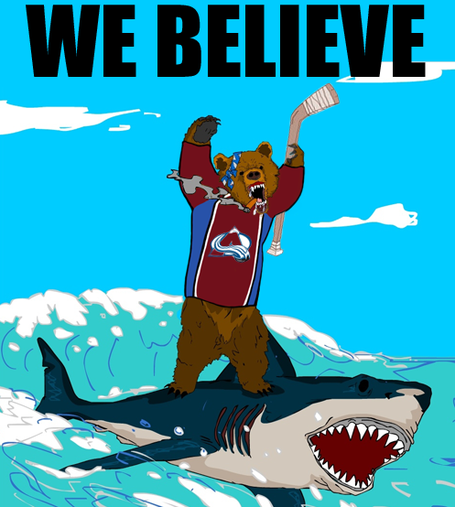