Share All sharing options for: Final Draft Rankings from CSS

Below is a swell chart from NHL.com that lists each draftee in their new and final ranking. The chart also futilely compares each newbie to an NHL veteran. Make of it what you will. And as good as Brett Connolly may be, all comparisons to Peter The Great should....well, they just shouldn't. 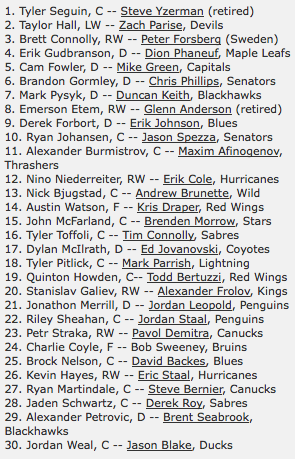 The above chart does not include European Skaters or goalies, or North American goalies.

So based on the new rankings, and the Avs final standing looking more sure, it looks like our good friend Nino is out of reach. Austin Watson moved up 11 spots but still looks like a viable option if he gets passed on by a couple teams on draft day, which many of our readers commented on as their preferred pick. Here's the scouting report. Quitin Howden and John McFarland would also be good additions/fits to the Avs system (yes! we have a system again!).

I still like McIlrath, the young brutish D-man. The other quality D-man in the Avs projected range would be Jonathan Merrill. Click here for our scouting report on defenseman.

The big-ish news is that Taylor Hall and Tyler Seguin flip-flopped the top spots, but don't be surprised if Hall goes first. Edmonton has a 48.2 percent chance of landing the #1 pick.

If you're a fan of ping pong balls, the draft lottery drawing will be televised live 8 p.m. ET on Tuesday, April 13 (VERSUS, TSN, NHL.com). The lottery will set the first 14 picks.