Where would the 09-10 Avalanche have landed without Craig Anderson? Maybe not last in the West, but no way in Detroit hell they make the playoffs. We've been singing Andy's praises and lauding his performance all year, and he's deserved every flattering word anyone has uttered - and then some. He is the reason the Avs got off to a hot start and were quick to find confidence in their game. While other players eventually stepped up and enjoyed break out seasons, it was the magnificent play of Craig Anderson that made it all possible. Andy came into his own, established himself as a bona fide #1 goalie, and gave an entire fan base reason to believe again.

Grades and stats following the jump......

Andy definitely struggled after the Olympic break, (almost twice as many losses than the first half) as did the entire team. The general consensus seemed to be that he was a tad overworked and fatigued both mentally and physically. Sacco finally gave Andy a rest in the last few games of the season and that intelligent move resulted in Anderson entering the playoffs refreshed and as strong as ever. Look at that playoff save %. Sexy.

If Anderson's workload is managed just a little more prudently by both Sacco's sadistic goalie non-rotation, and a team in front of him that doesn't allow more shots on their netminder than all other goaltenders, then Andy's (and the Avs') success should be even greater next year.

Could Andy have done anything more this season? I don't know that he could have. He accomplished all he could, and more, with what he was dealt. In his inaugural season as a starter he was his team's best and most consistent player and he was the team's MVP. That being said, I feel like we have to leave some minuscule room for some improvement. Maybe a Vezina nomination next year? "A" is for Andy! 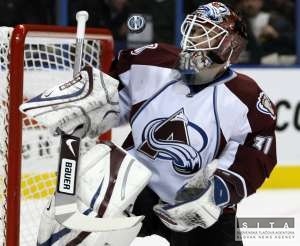 Here's a fun fact for you: Budaj and Anderson posted identical save% and GAA. But while Anderson earned a bullet point list of grand feats, Budaj gets bullet points of mostly sad defeats. Poor Budaj.

One game summed up Budaj's season in a nutshell for me: On December 2nd, 2009, Boots (or Boods, or not, if you're Mike) received a shootout loss at the hands of Florida after Craig Anderson got run by Keith Ballard with 42 seconds left in OT. The Avs lost the shootout and poor Budaj got tagged with the loss, even though he never statistically even faced a shot, made a save, or allowed a goal. Craig Anderson allowed 5 goals that game, and Budaj ended up with the loss. It sucks being a back up.

Budaj will be an Unrestricted Free Agent this summer and I have to believe he'll look for a chance at a starting job elsewhere. It's a bummer, because by all accounts he is a fantastic teammate, and oddly enough, an asset in shootouts because of his avid research on opposing goalies methods and tendencies. On the other hand, if Sacco isn't going to play his back up goalie, he may as well employ someone who is cheaper than Budaj's $1.25 mil, and put that excess cash into a winger. With the rise of Anderson, it just doesn't make sense for Budaj to stay. Peter "the OK" is a divisive player amongst fans, but I'll be sad to see him go. Good luck Budaj, wherever you may tread, and may Ned Flanders guide thee true.

He gets an "A" for being classy concerning his role/treatment and for being a truly loyal teammate. His mistreatment and unfortunate game situations aside, his play just wasn't getting the requisite results. His numbers for the year are pretty average (C), and his play in most of his 2nd half starts was shaky and understandably inconsistent and rusty.

But I still believe in Peter Budaj.