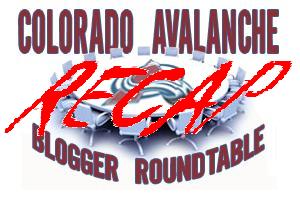 Off and on during this offseason I thought I'd take a look back at this year's Avalanche Blogger Roundtable and look at what the all-knowing, all-seeing Avosphere had to say regarding the team and the season that was to be.

First up, we look back into list of suggestions/advice for rookie head coach Joe Sacco made by some of your stalwart Avalanche bloggers!!

If I could make one suggestion to Coach Sacco for his first season coaching the Avalanche, it would be to continue the youth movement that he so very successfully began last season in Lake Erie. There is an abundance of young talent who he has already started the development process on and many more new-comers who he can groom to fit the style of play he envisions the team using...

Granted, Sacco didn't have much say in the youth movement as he was handed a team with lots of holes that weren't filled via Free Agency during the offseason, but we'll still give Adam all the credit for the Young Guns getting a legit shot under Sacco. Maybe Sacco read the post and decided that he needed to hire Adam as his guru, because Adam hasn't posted since Joe Sakic night.

Myself, DDC and Aaron from Hockeybuzz all wanted Coach Joe to instill SOME kind of identity on the team:

Deep. That's why we pay him the big bucks, folks.

Don't let up. Sacco has a young team without an identity that he will have to mold in the way he wants... - Aaron

And that's why I don't get paid for shit.

That being said, I think Sacco's repeated insistence on playing "on their toes" proved that he heard DDC and Aaron loud and clear.

Matt from Mile High Mayhem got downright specific with his recommendations to Coach Sacco:

Please, please, for the love of God Joe, let the forwards develop chemistry and give them a system to play in. Both Granato and Quenneville were schizophrenic about their lines and I firmly believe it really hampered our offensive chemistry....And don't play Svatos on a checking line, seriously...

Perhaps Matt angered Sacco with his assertion that Marek Svatos wasn't the enforcer this team desperately needed because he too disappeared a scant few days into the season.

My suggestion for Sacco - Don't let the soft style of Granato linger and don't let your green status allow players to walk all over you. This team has a lot of challenges up ahead and only a tough as nails coach that commands respect is going to get them there...

I'm pretty sure John-Michael Liles would agree that this seems to be how the season went for a select few players.

Jay from the always-awesome Avs Hockey Podcast put all our hopes and dreams into his little gem of advice for the new coach:

The thing that I felt has been missing with this team for a few seasons now is an identity for giving an honest effort every single night. Sure the Captain's gone, and the team is young, and insert more excuses here if you'd like, but I'm hoping Joe Sacco can create an identity for this team so they're known for that. I'm just hoping that the opposition and the fan base of the Avs will know what they're getting every night. It's just been tough to watch on television and show up and never know what you'll get each night. A hard-nosed honest effort night in and night out is always a pleasure to watch, win or lose. I hope Sacco can get this out of his new team so it's always worth the time we take to watch the games. My suggestion: create that identity.

I'd like Sacco to refresh himself on this point between 2nd and 3rd periods when the Avs have a lead, but all in all, and I can only speak for myself and the Mrs. (cuz that's legal in Oklahoma), it was much more fun watching this team this season, so it appears the the coach got this particular memo too.

So there you have our first look back at the Roundtable that was.  All in all, I think we all had some good advice (especially mine) that managed to bear some fruit during the last season.  Hopefully, Sacco and management will continue to heed the advice of use underwear-wearing, basement-dwelling, anonymously-courageous bloggers in the seasons to come.