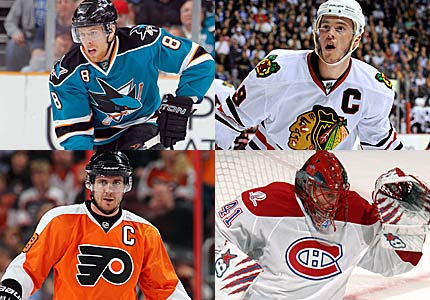 Well ladies and gentleman, we are halfway home. The conference finals are set to kick off today and they are going to be good. As a blogger on another site said, "If you picked the Montreal and Philadelphia Eastern Conference Final, will you please go back to your home planet, because you are obviously not from this one."

Not sure if the #7 and #8 seeds have ever played in the conference final, but that's what we have and I'm definitely looking forward to watching how this one plays out. There are definitely some questions heading into this series though. It's been reported that Ian Laperriere was skating in the pre-game skate for the Flyers, if he comes back, how much of a difference is he going to make, if any? If Sergei Kositisyn can come back and return to form, what kind of impact is he going to have on this series? How much momentum are the Flyers going to carry into this series after coming back from not only a 3-0 series deficit against the Bruins, but a 3-0 score deficit in game 7? A lot of the so called experts say that it's difficult to carry momentum from one game to another, never mind a whole new series, but I feel that that win could carry the Flyers to the Finals and beyond.

Follow the jump for a look at the Western Conference Finals and a chance for you to make your predictions.

In the Western Conference Finals, things ended up "the way the were supposed to" with the #1 and #2 seeds playing for the right to move on the Stanley Cup Finals. San Jose was able to brush aside the Red Wings in a measly five games to get to the Conference Finals. I know it's been said, but it bears repeating, at least we took the Sharks to six games, just sayin'. Chicago ran through both Nashville and Vancouver in six games to reach the Conference Finals.

While this series doesn't seem to have the questions the Eastern Conference Finals do, there are still a few out there. Will Antti Niemi continue to play well enough to end the Cup drought in Chicago? Will the experience that Jonathan Toews and Patrick Kane gained in playing in the Gold Medal Game for Canada and United States, respectively, help them as the stakes get higher? Is the ghost line of Marleau-Thornton-Heatley going to show up in the Conference Finals? Can Evgeni Nabokov carry this team if that line doesn't show up? Finally, how good is Joe Pavelski playing right now? If nothing else, I'm rooting for this guy to play well. That's not saying I want the Sharks to win, because I don't. I just want him to become frustrated playing in San Jose and losing the last few years and sign in Colorado @ $35 million for 5 years.

What do  you think?