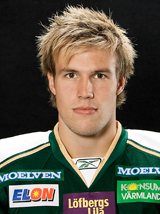 Stick tap to Angelique who let us know that CapGeek.com is reporting that Norwegian defenseman has signed with the Avalanche. It's a 2-year deal, estimated to be in the $600,000 cap hit range.

Holøs was drafted by the Avs in the 6th round of the 2008 draft. It has been widely rumored that his signing with the Avalanche was eminent and now it's (pretty much) official. Hockey's Future grades him at a 6.5D, which means potentially a 3-4 or 5-6 defenseman, but not a sure bet to reach that potential. Then again,  they also have appear to have him confused with Tyson Barrie, so take that with grain of salt. He most recently played for Farjestads BK in the Swedish Elite League. Holøs is listed at 5'11 and 198 lbs on his Farjestads profile page. He wore #6 last year.

To answer some other important questions, you make an ø by holding the Alt key while typing 0248. And, according to the NHL, the name is pronounced YOH-nuhs hoh-LAWS.