Lessons to be Learned from the Chicago Blackhawks

Share All sharing options for: Lessons to be Learned from the Chicago Blackhawks 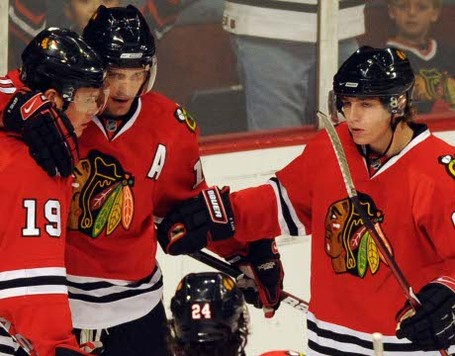 The Chicago Blackhawks have steamrolled their way through the Western Conference this season and look to be unstoppable on their way to a Cup. The Blackhawks have done this despite only having two super high draft picks (Jonathan Toews (3) and Patrick Kane (1) ) making them more akin to the Avalanche than say the Pens ( two 1st picks and two 2nd picks in four years). Like the Avs, many of their better players came from lower rounds (Dave Bolland, Dustin Byfuglien, Duncan Keith and I'd make a crack about Craig Anderson if Antti Niemi wasn't so f*cking good) so the Hawks are a good example of how to build a contender through the draft. Here are a few lessons the Avs could stand to learn from them:

1) The potentials and pitfalls of free agency. Obviously it is impossible to make a team solely out of draft picks. The Hawks have done a few things right and a few things wrong in augmenting their team with free agents. Patrick Sharp was an outstanding signing by this team, bringing leadership and consistent goal-scoring for 3.9 mil against the cap. Brent Sopel brings stability to the defense and John Madden is a wily defensive-minded vet both for less than 3 mil. The Avs already have a lot of these pieces in players like Milan Hejduk at an excellent 3 mil, Scott Hannan who still makes a boatload but would be excellent next summer at 2-3 mil and Stephane Yelle and that needs to be the message for the Avs during free agency: established talent that augments the team at a decent price. Paul Stastny, Matt Duchene and Chris Stewart are the superstars of this team and the Avs need to remember that because there is a dark side to free agency.

I am talking, of course, of Marian Hossa, Brian Campbell and Cristobal Huet, three players that count for a combined 18 mil against the cap. Now they are all good players but lets look at what they bring to the team. Hossa is the best bringing 24 goals in an injury shortened season, defensive acumen and Stanley Cup experience but his play during the playoffs (2 goals) leaves a lot to be desired for the highest paid forward on the team. Brian Campbell is a great puck-moving defenseman but on the Hawks is a second-pair defenseman and has all of 3 assists during the playoffs. Huet is riding the bench as a backup. Back in the day this wouldn't have been so bad but with the salary cap its potentially going to cost them some quality players like Andrew Ladd, Madden, Ben Eager and Niklas Hjalmarsson this summer and perhaps Byfuglien, Troy Brouwer and Sopel next summer. This is bad because lesson number two say...

2) Depth is good. When going for a cup, the bottom six forwards on the team are just as important as the top six. The Sharks learned this to their dismay when they had no answer for the Hawk's 3rd and 4th lines (okay, they had no answer for any line but my point still stands). Let me show you something interesting: the top ten goal scorers in the NHL this season were Sidney Crosby, Steven Stamkos, Alex Ovechkin, Patrick Marleau, Marian Gaborik, Ilya Kovalchuk Alexander Semin, Dany Heatley, Zach Parise and Alexandre Burrows. The common thread between them? None are in the Stanley Cup finals. I am not saying that it is foolish to have these players on a team but it is foolish to throw a boatload of money at them (can you guess where I stand on Kovie?). The Hawks had no goal scorer in the top ten but had six (!) players who scored more than twenty goals and five more with at least ten. The Flyers are the same way, none in the top ten but ten with ten or more goals. Note that the Avalanche had nine players with ten or more and four with twenty or more. We'd all like to see a top flight LW join the team but the Avs offense already had the potential to be outstanding.

3) Get big. The Hawks just basically ran over the biggest team in hockey in part because they could match the physicality of the enormous Sharks. Now the Hawks aren't as big as the Sharks but they were big enough not to let the Sharks size play too big a roll. In actuality, the Avs and the Hawks have comparable size in forwards (though the Avs could use a massive guy like Byfuglien but, then again, who couldn't?) but the Avs defense is just too small. Now, again, the Hawks aren't huge. Seabrook is their biggest guy at 6'3'' and 218 but there isn't a single defenseman under 6'0'' while the Avs have two 5"10" guys in John-Michael Liles and Kyle Cumiskey and the biggest guy is slow, old Adam Foote at 6'2'' and 220. Kevin Shattenkirk is 5'11'' so if he makes the team do the Avs play three guys under 6'? It can't happen in the rough and tumble Western Conference. The Avs defense has to get bigger.

4) Create a buzz. This is essential for a team creating through the draft to create a buzz around their team. Duchene, Stewart, T.J. Galiardi: all these guys are tremendously fun to watch but few beyond the hardcore fans know who they are. Obviously winning games does a lot to draw the fans back but the Avs need to take it a step further. The Hawks have done some silly things like walking down a red carpet or painting a big mural of a pug-nosed Toews but they got people back into the building so they could fall in love with Kane and Toews and Keith. The Avs need to get out and stir up some excitement in Denver. The fanbase is there and the team is winning again. There is no excuse for having attendance problems again next season.

I am sure there is more we could learn from such an outstanding hockey team but those 4 points are critical for the Avs moving forward.