Share All sharing options for: 2009-2010 Colorado Avalanche: 10 Things I Hate About You 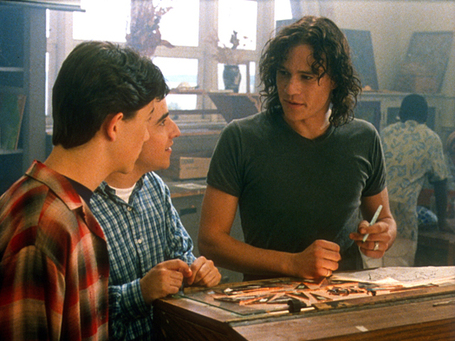 Criminally underrated Heath Ledger Movie?  Yes, but not the point of this post.  Seriously, but before we all start waxing poetically about the season that just was, I wanted to get down my thoughts for internet posterity.  This was a fun team to watch for long stretches this season.  It was also maddeningly frustrating at times. And for that reason, I want to get my negative vibes on the table and dealt with so that we can all move on.  While the previous season's team had holes in almost every conceivable aspect of the game of hockey (goaltending, depth at center, defense, power play, special teams, coaching, injuries, broadcasting, etc.) this year's squad only had a few glaring issues.  And by glaring I mean don't stare directly at the sun or you'll burn out your retinas.

In reverse, from least to first!

Number 10: T.J. Hensick - I have no particular beef with the previous "good T.J."  Rather, I have a weird feeling that somebody else from this year's squad that showed flashes of promise and gooey hockey goodness will revert to type next season.  It's inevitable that there may be some regressions among the young players from the past season so nobody should go into the summer with the burgundy glasses taped to their heads.  If nothing else, Hensick is a cautionary tale for about 97.4% of the forwards on this season's team.  I hope that he remains a cautionary tale and not a precognitive nightmare when 2010-2011 rolls around.

Number 9: 3rd Jerseys - Good God these things didn't bring any luck to the team at all.  The Blueberries largely provided the blues to the fanbase when they came out of the tunnel on game night.  Some of the worst games of the season were wrapped up in the Smurfiforms.  If the organization is as greedy as well like to pretend they are, they'll retire these anti-rabbit's feet ASAP and trot out a new 3rd to get more of our hard-earned money. 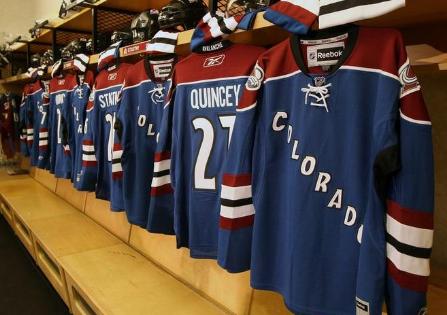 Number 8: Brett Clark's Mouthpiece - Seriously, WTF?  It's a necessary part of the safety equipment for the modern NHL.  If Lappy of all people can come around to visors, then surely Clark can learn to keep his mouthpiece in his actual mouth.  If not, don't bother wearing one.  It just doesn't make sense.  Would you skate around holding your cup and only use it to cover your junk when you thought an injury was emminent?  Of course not.  Because that would be stupid.  Just like skating entire shifts with your mouthpiece a hangin' out is stupid.

Number 7: The Avalanche Experience - I imagine it went down like this.  The marketing department sat down during the summer to bang out a campaign for the upcoming season.  They went around the room making pitches Mad Men style (awesome show).  At the end, they took the plucky intern's "Avalanche Experience" idea and ran with it.  Here's a tip for all future marketing geniuses out there: When the intern's ideas are the best ones at the table, you need to take a step back and evaluate the talent at the table.  This was quite possibly the least inspiring (or inspired) advertising campaign in a loooooooooooong time.  It was so banal that we even got sick of making fun of it here. And ask Joe, we never get sick of making fun of stuff.

Number 6: Injuries - Specifically head injuries, but I don't want to exclude the freak injury that laid up David Jones for the season either.  I'd be lying if I said I wasn't worried about his recovery or the recovery of Ryan Wilson and Peter Mueller from multiple concussions this season.  And despite what the official injury report says, I'm pretty sure Milan Hejduk got his bell rung in the playoffs.  How these guys come to camp and start the season will be important indicators on the upcoming season.  Consider me apprehensive.

Number 5: Wheel O' Defensemen - I understand that benchings are motivational tools even at the NHL level.  I'm not sure arbitrary benchings are though.  I understand injuries lead to rotations and in-one-game, out-the-next appearances for the defense corps, especially with the age of some of the Colorado blueliners, but come on....this got down right ridiculous at times.  By my rememberence, Adam Foote was the only guy we KNEW was going to be in the lineup every night (when healthy). The rest was a literal roll of the dice. You can't coach a team with Pat Sajak as your guiding influence. 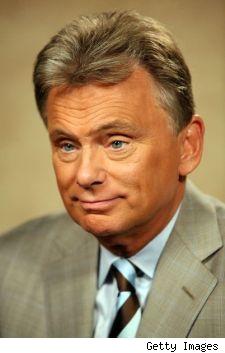 Number 4: Budaj's Hat - As in "We saw to much of his ball cap and not enough of his goalie mask."  I know that in all likelihood Sacco was riding the horse that brought him to the party for stretches of the season, but I also know that if he'd been a little more judicious with spelling Craig Anderson during the season, the .500 hockey after the Olympic break wouldn't have been as nerve-wracking. Peter Budaj is a capable goaltender.  Why nobody in the coaching staff thought so, I don't know.

Number 3: Lack of Killer Instinct - Why would this team, with absolutely nothing to lose for 7/8ths of the season play tentative hockey with a lead?  Why?  Put your foot on their throats and embrace the Avalanche.  Balls to the wall hockey.  You were hanging Andy out to dry when you backed into your own zone like the French army, so why not unleash the hounds instead?  It really bothered me, even taking into considerations the "It's a sign of a young team" cliches.  The bonus to this item is that it forced us to talk about Corsi/Fenwick and try to explain away the massive discrepancies because of the way the team played in these kind of situations.  I believe the team is better than this.  I just want to see that belief on the ice too. Pussy to the wood!

Number 2: No Super Joe - The whole season felt odd without Number 19 skating around out there.  The haze of alternate-reality wasn't as deep as it could have been if Joe had played much the previous season, but it was still disconcerting.  He is my favorite player and I don't think I'm 100% adjusted to life in the Post-Sakic Era.  At the same time, I realize that he isn't going to walk through the door and save any future teams.  I embrace the new guys wholeheartedly and only hope that they understand the legacy that they are following.

Number 1: Hope - As we've discussed ad infinitum this season, things look bright for the Colorado Avalanche moving forward.  A good/borderline great core of young forwards.  Some sparks of something special in a few young defensemen, a goalie who seems to have embraced the city, the team, and the legacy of the past, and a coaching and management staff that seems determined to put a stellar product on the ice.  But the brutal honesty of past season is that there are problems with this team.  Big problems.

But at the end of the day, the hope they've instilled in the fanbase can come back to haunt us all if management doesn't take the appropriate steps to continue the rebuild and stay the course.  I thought the moves at the deadline this year were deft and practical without over-paying or mortgaging the future.  More decisions like that during the off-season will keep the flame of hope burning bright as the Colorado Avalanche turn the page on the next season.