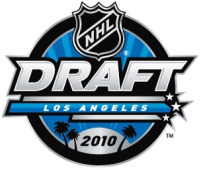 The Avalanche enter the 2010 NHL Entry Draft in Los Angeles armed with seven draft picks.  After striking gold early in the 2009 draft, the Avs hope to add to their arsenal of young talent over the course of the next two days.

*Pick acquired from the Los Angeles Kings, along with defensemen Kyle Quincey and Tom Preissing for forward Ryan Smyth.

**Pick traded to the Carolina Hurricanes, along with forward Cedric Lalonde-McNicoll for forwards Stephane Yelle and Harrison Reed.

If you are a Colorado Avalanche fan, it's difficult not to look back at the 2009 NHL Entry Draft without a sense of fondness.  In a league in which having a first round pick make the big club out of his draft year is more of the exception then the rule, the Avs struck a rare feat with both Matt Duchene and Ryan O'Reilly making and sticking with the Avs for the entire 2009-10 season.

While it's early, the Avs appear to have picked out two solid defensive prospects in Stefan Elliott and Tyson Barrie.  The latter was named WHL Defenseman of the Year.  It typically takes four to five years to truly judge a draft class, but it's hard to deny the Avs a passing grade for this bumper crop.

Forwards (left-wing):  Within the farm system, the Avs lack pure goal scorers and snipers, especially on the left side.  In regards to left-wingers, the trade of Wojtek Wolski left a void that the Avs hope Peter Mueller can fill.  In addition, they hope Ryan Stoa can build off his solid rookie campaign with the Lake Erie Monsters this past season.  Still it's a position that severely lacks depth and one the Avs have the potential to address in this draft.

Defensemen (defensive defensemen):  The Avs have acquired a solid crop of offensive defensemen in the last few drafts.  Yet, that has left some to lament about the lack of pure physical defensive defensemen within the system.  The Avs do have a couple of solid candidates in Cameron Gaunce and Jonas Holos who can help fill the void (to a point), but there are potential targets in this draft that can help to fill the coffers.

Goaltenders:  This may be the most lacking area in the farm system.  Yet, the Avs do have some leeway with Craig Anderson manning the nets in Denver for the next handful of years.  Peter Delmas didn't live up to expectations and was left unsigned by the June 1st deadline.  As a second round pick, this leaves a sour taste.  The goaltending prospects in the Avs farm system are littered with question marks.  Someone may yet emerge, but the Avs would be doing themselves a disservice if they do not select a goaltender in this draft (regardless of the round).

The Avs have taken a different approach on the draft since the lockout.  The Avs have had 38 draft picks between 2005 and 2009.  Here is the breakdown by league:

About 39 percent of the Avs draft picks come from the CHL, eight percent from Europe and 53 percent drafted out of various US leagues, schools and organizations.  Colorado has taken chances on European and high school players late in the draft, preferring to use its high and mid round picks on CHL, NCAA, USHL, and USNTDP players.

Nothing spectacular here, but one should note that the Avs average is of taking at least one goaltender per draft.  This would be something to keep in mind during rounds 2-7 on Saturday.

While the Avs are jokingly called "BU West" or "Colorado Terriers" for their propensity to draft players out of Boston University, the team actually drafted four University of Minnesota (or Minnesota bound players) during 2005-09 compared to three out of BU.

Over the course of the last few weeks, I had the opportunity of participating in two mock drafts; one a three round mock and the second a seven round mock.  (Let me throw out the disclaimer that I'm not an expert, far from it.  The opportunity to participate in these mock drafts was fun and in many ways that's how it was approached on my part.)  Here are the results:

In the first round I went with the best player available (BPA) and in both situations I felt it was Campbell.  Despite my resistance of drafting goaltenders high in the draft, this kid is a special player.  For the Dylan McIlrath fans, he went 28th overall in the first mock and 25th overall in the second.

In the second round, being the DU fan that I am, I selected Jason Zucker.  It's somewhat of a homer pick, but he was a solid contributor internationally for the US National Team Development program.  He was the only U-18 skater that participated on the US World Junior squad that took gold in January and also won a gold medal with the US U-18s in Belarus.  He's already a solid defensive player and he'll have a chance to develop his offensive game at DU.

To finish up the three round mock, I took a chance on power forward Max Gardiner.  He's committed to the University of Minnesota and as mentioned earlier in this preview, the Avs like their Gophers as much as they like their Terriers.  Kevin Gravel is a 6'4" defensive defenseman.  He needs to add some weight to his frame, but could be a nice developmental player.  Gravel is committed to St. Cloud State University.

I decided on BU bound forward Yasin Cisse in the fourth round.  Cisse is currently recovering from a torn ankle tendon he suffered back in December.  Cisse may don a BU jersey this fall, but his enrollment could be pushed back until 2011.  I admit this is an early spot for him.  In fact he could be bypassed entirely due to his injury.  The Quebec native is 6'3", 208 lbs, which will make him attractive to scouts, but he needs to better utilize his size.

Despite taking a goaltender in the first round, I decided on taking one in the fifth round as well.  Realistically, Campbell will not be available at pick 17 and the middle rounds are likely where the Avs will take a netminder.  Sam Brittain is DU bound and will have an opportunity to compete immediately for the starting goaltender spot with the Pioneers.

The last two picks I used on a couple of high school forwards.  This is the time of the draft in which the Avs take chances on Europeans and high school kids.  Max Gaede will head to the USHL for a year before playing for Minnesota State University.  Brian Ward, committed to Dartmouth (2011), led his team in scoring this past season.

Reasoning:  Watson's draft stock is rising, but he is expected to be taken in the 12-18 range, right where the Avs are picking.  As a winger, Watson has size, good speed and doesn't shy away from physical play.  Scouts have questioned his offensive output as a professional player, but at worse, you are looking at a solid third line player in the future.

Watson wasn't my first choice, but I eliminated other possibilities due to previous trends.  I eliminated European players as well as high school and Canadian Junior Hockey League players.  Even though Jack Campbell fell to pick 17 in both of my mock drafts, don't expect him to slip down that far on Friday.