Share All sharing options for: An Interesting Parallel: '92-'93 Quebec Nordiques 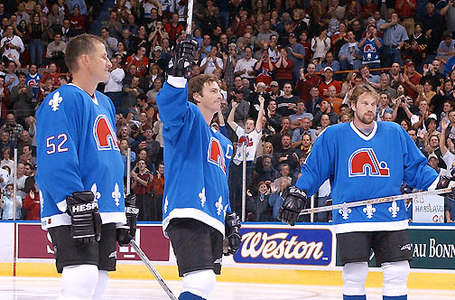 In the 1992-93 season the Quebec Nordiques made a startling turnaround by making the playoffs after having the second -worst record in the league the previous season. Sound familiar? And just like our Avs the Nords were very, very young. In fact, they were even younger than the Avs with no major players over the age of thirty. Obviously, the 1995-96 Avs went on to win the Stanley Cup, so I thought it might be productive to look at the two intervening seasons and the changing shape of the team.

Similar to the Avs this season, the Nordiques got knocked out of the playoffs in six games in the first round in 1993. And just like all the negative nancys around here are predicting about the Avs, the Nords took a step back the next season and missed the playoffs. In '95 they played well during the lock-out shortened series but were upset in the first round by the New York Rangers. So interestingly enough, two first-round exits were all many of the Avs players had before they won the cup. Basically this is just another warning about getting too excited about our young team. They'll probably take a step back next year but they are moving in the right direction so its important not to get discouraged next year, even if the team misses the cut or gets booted out in the first round again. What really interested me about the '93 Nords, however, was how completely different the team looked by the time they won the Cup in 1996.

The young core that led the Nords in such a phenomenal turnaround included Joe Sakic, Mike Ricci, Scott Young, Valeri Kamensky, Adam Foote and Alexi Gusarov who were on the '96 team there was plenty of other talent on team including Mats Sundin, Andrei Kovalenko, Steve Dushesne, Owen Nolan, Ron Hextall and headed by Pierre Page, who was nominated for the Jack Adams trophy that year. I'm sure fans expected that a lot of those players would help lead the team to the Cup, particularly Sundin as a one-two punch up the center with Sakic and Hextall who was in his prime. So what happened? Sundin was traded for Wendel Clark (who was eventually traded for Claude Lemiuex) and Hextall departed via free agency. Dushesne was traded to St. Louis for nothing much and Page was replaced by Crawford in '94. Nolan was traded for Sandis Ozolinsh and Kovalenko was part of the package that netted the team Patrick Roy and Mike Keane.

The team traded away some promising young talent in order to make a champion so don't be surprised if the Avs look remarkabley different in a few seasons. Am I suggesting we trade Matt Duchene for Shane Doan? No. But I think it is important to keep an open mind about trades in the future. I think the Avs management has earned some trust after last season.  I mean, I was the first one to condemn that trade and curse the Avs management for trading Wojtek Wolski for Peter Mueller but look how it has worked out so far.

So what was the point of all this? Am I calling for the Avs to win the cup in 2013? Well, no, but it is in the realm of possibility. It's just interesting to see what the organization did in this situation eighteen years ago. The 1996 team had different players, no salary cap and the amazing luck of seeing two clutch playoff performers in Lemiuex and Roy have falling out with there organizations. But one of the exciting things about being a sports fan is how impossible it is to predict anything. But its good to feel hope again about the Avs. I imagine that this is how Nords fans felt during the '93 off season.