Share All sharing options for: Avalanche Defensive Prospects (part 1 of 2)

For the past several years the Avalanche organization have displayed a definite tendency to draft offensively skilled puck moving defenseman. Liles and Cumiskey are two of these types of players to make a splash in the NHL, but the team boasts a stockpile of these types of players. In fact, the Avalanche are deepest on defense, especially since many of these youngsters are earning praises and excelling at their current levels.

Greg Sherman has stated that the mission is to build from within, but with the bounty of young talent coming up through the pipeline, the Avs may soon face the complicated conundrum of having too much skill and not enough room on the roster. That's a good problem. One most GM's would kill for. With that surplus of talent, the Avs will be able to make moves and cut the fat to address other needs. It was a savvy move to draft these young puck movers because every team needs and covets them. And while you can't make a solid defense corps out of nothing but Cumiskey's, a true cup contender requires at least one or two.

Yesterday DDC threw down a nice examination of Colorado's transitioning roster. I'll add this 2-part study of defensive prospects, and next week will finish up the investigation (I have to do it in 2 parts because there is too much good news to fit in one post).

Foote, Liles, Hannan, Cumiskey, Wilson. Of these 5, only Liles currently enjoys a contract that extends beyond the 2010-2011 season, meaning there will be open roster spots for the youngsters in the near future. Barring any contract problems, Quincey should round out the 6 man group if he signs this summer. Other players still under contract, but likely to stay put in Ohio: Tom Preissing and Kevin Montgomery.

Contract Status: signed for 3 years at a 1.3 million cap hit.

Shattenkirk is the most highly toted prospect among the Avs D. His history of success is already loaded: Success in international play at the IIHF World Junior Championship, serving as BU's captain last season, won the collegiate national championship with BU in 2009 by throwing down the primary assist (a beauty fake shot then drop pass) on roommate/linemate/teammate Colby Cohen's OT winner against fellow AV Justin Mercier and his RedHawks in that awesome 2-goal comeback in the final minute and a half.

Shattenkirk is a mobile, offensive defenseman. He is also reportedly an excellent leader. He has good vision on the ice, to go along with a "deceptively strong shot". Captain Kirk will most likely start in Lake Erie this coming season unless he is magical at camp, but he will definitely see NHL minutes during the 2010-2011 campaign. He is probably going to be the first call up on D. He isn't huge, and I haven't heard much about his physical game, but he should evolve into a solid NHL defenseman. He got a small taste of the pro game with the AHL Monsters at the tail end of last season, potting 2 assists in 3 games. 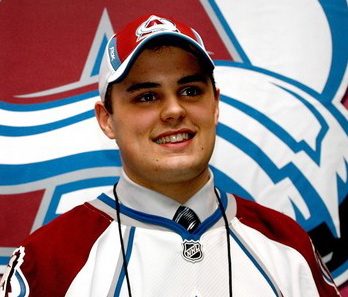 Cameron Gaunce is a well rounded defenseman. Nothing particularly stands out in scouting reports, which is actually a good sign. He is reliable, if unspectacular. TSN noted he was a +57 in his last two seasons. Gaunce breaks away some from the "small, fast, puck moving defenseman" model the Avs have recently leaned towards. He is larger and stronger than many of the other Avs young D prospects, he is physical in front of the net and along the boards, and not afraid to get his nose dirty, but his skating still needs to improve to adjust to the pro game. Lake Erie will help. Another plus for the Avs is that he fires a hard left-handed slap shot, which may make him the 2nd PP quarterback of the Avs' future.

Holøs is an intriguing prospect. in 2009 he helped lead Farjestads to the Swedish Elite league title, leading team defensemen in goals in the regular season. My name is Jonas has also garnered much experience playing internationally for Norway. At both the Vancouver Olympics and this last month's IIHF Worlds Championship, Holos lead ALL tournament defenseman in time on ice. He has been projected as a 5th or 6th defenseman, and at best a 3rd or 4th. With all the big minutes this dude plays, and against both the top European and international players, he is hopefully on the fast track in his development, but if not, his time in Lake Erie next year will help. Until then, enjoy this patented Holøs backhander: