Oh wow this is sad. I just opened the first, first draft of this thing that I made, which was back in February. And he was injured. I realize that Jones being injured when I wrote the newsletter hardly narrows it down (for instance, it could be any day ending in "Y'') but trust me, it's been a while. So basically I had to rewrite the whole thing, which I managed to do via the amazing powers of vodka. Also I found out that my e key is broken, so that's pretty awesome anyway enough about that WELCOME ONE AND ALL FELLOW DR. JONES FANS, TO THE INAUGURAL OFFICIAL DR. JONES FANCLUB NEWSLETTER

My fellow Dr. Jones fans,
Welcome to the official Dr. Jones newsletter. You can tell it's official because I've been using the word official to describe it as if I'm being paid 5 bucks every time I use the word "official" in an official sentence.

Also only the most official of official newsletters would be typed up haphazardly in Microsoft word and pasted into the fanpost feature at SBnation, hoping that firefox would catch all the spelling errors and having to re-type the letter e 500 god damn times because every word with an e in it manages to lose the e when I first type it - but I'm getting off track.

As we all know, our beloved Avalanche were booted in the first round of the playoffs last year, 100% of the blame going to coach Joe Sacco who was concerned for the durability of Dr. Jones and didn't play him. I ask you now, if he is so damn fragile, then why does he have the nickname IRONDOCTORJONESMAN? (answer: because I just made it up) Either way, Jones' potential 35 playoff goals and 68 assists were sorely missed in his absence from the playoffs. I'll send a strongly worded letter to the Minnesota Wild telling them to stop throwing players onto his leg. After all, his leg is his achilles heel, along with all those other bones and joints he probably has. There is nothing to disregard my theory that other than the leg he is made of bionic titanium reinforced awesome though.

Also, something about some scrub named Kobolchock or something kept coming up and distracting me from my usual Dr. Jones worship hour on MHH every day, what was that all about? We'll just stick Jones in as the first line left wing instead, much cheaper and less douche-y and totally a better hockey player too trust me on this one have I ever lied to you before no I certainly haven't shut up let me talk. He can keep his job as third line right winger too. He will also be playing goalie in this scenario, thought you ought to know.

TIME FOR THE DR. JONES PICTURE OF THE DAY 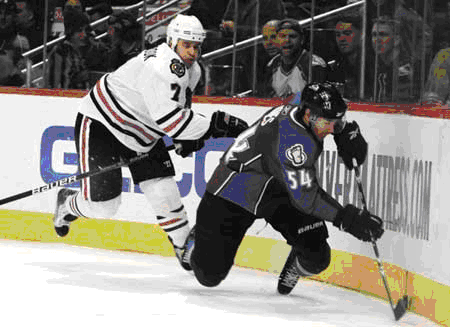 A fantastic (if incredibly low quality) action shot of the good doctor in action. I'm not actually sure what he's doing, so I'm just going to assume he's heroically diving after a small starving and sick Haitian child in order to deliver him/her to the hospital just in time for him/her to live. The child will of course grow up to be an ambassador and also create the first ever cure for cancer, with Jonesy's heroics rubbing off on him/her quite nicely.

Or maybe he's going after a loose puck that's hidden behind his stick in the pic.

Either way, that Blackhawks player looks very miffed about the whole ordeal. Maybe he's too tired from chasing Dr. Jones all over the ice? Even the most athletic of Olympic sprinters would fail at such an endeavor, I'm sure.

Speaking of looking miffed, check out that dude with the hat on in the crowd. What's his deal? He looks like he just saw Rosie O'Donnell naked or something.