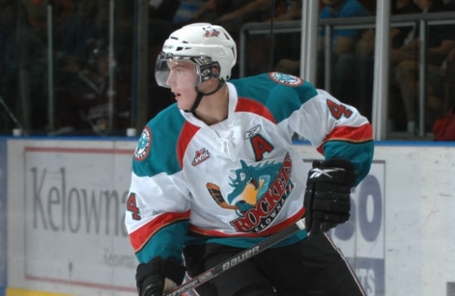 via www.kelownarockets.com. Photo by Melissa Baecker

Happy 19th birthday to Avalanche prospect Tyson Barrie. Barrie, a 3rd-round pick of the Avs in last summer's draft, is a defenseman for the Kelowna Rockets. Last year he tied for the WHL scoring lead for defensemen with 72 points in 63 games, which makes you wonder how long it will be before he joins fellow 2009 draftees Matt Duchene and Ryan O'Reilly on the Avalanche roster.

Barrie is son to former NHL player and former Lightning owner Len Barrie. In fact, when Tyson was born way back in 1991, Len was playing for the Hershey Bears (although this was a few years before the Avalanche before the Colorado - Hershey affiliation). That was just two years after Len scored an amazing 85 goals and 185 points for Kamloops - a team coached by Ken Hitchcock and featuring a couple of teenagers on defense named Scott Niedermayer and Darryl Sydor. Oh, and some guy named Ed Bertuzzi too. Not sure if there's any relation there or not.

In case you missed it, Tyson was interviewed by Angélique back in January.