It's been a few months since the Avalanche traded Wojtek Wolski to the Coyotes for Peter Mueller and Kevin Porter and I have to admit I'm still fascinated by it. Setting aside Porter for the sake of discussion, Wolski (The Baron) and Mueller (Ferris) have striking similarities in their career. They are both former first-round picks. They both dig the number 8. They both had solid rookie seasons but then saw their production decline in subsequent seasons. They both possess noticeable talent, but have battled inconsistency and have occasionally found themselves in their respective coach's doghouse (and in both cases, we're talking more than one head coach). And, of course, both of them loved the change of scenery, tearing it up with their new teams after the trade that some have said was in the Coyotes' favor.

As of this writing, Wojtek Wolski has played in 320 NHL games to Mueller's 222 (Wolski debuted a season ahead of Mueller). For the sake of comparison, I took their current NHL totals and boiled them down into what they've averaged over 82 games:

I have to admit, those numbers are a lot closer than I expected them to be. Wolski does have an advantage almost across the board, but the difference is only 7 points per season. I did say we'd leave Porter out of this, but it's worth pointing out that he's averaged 20 points per 82 games to date in his career, which would technically fill that 7-point gap...albeit not spectacularly.

The question is, how will both perform in the future. Based on historical evidence, neither player will be able to repeat their post-trade pace. Both were playing at a point-per-game pace in after the trade. In their career, though, they'd each managed a point-per-game month just one other time.

I'm no statistical whiz, which may be why I'm a fan of point-per-game as a simple barometer of how a player is performing offensively. Thanks to the tremendous archives at hockey-reference.com, I charted Mueller and Wolski's PPG progression from month to month since they began playing in the NHL and long with their cumulative PPG along the way.

For a guy with such a knock for inconsistency, Wolski has put up remarkably consistent numbers throughout his career. He's hovered between .62 and .72 PPG throughout his entire career (that ranges between a 51-point pace and a 59-point pace). For most of his career, his monthly pace has been pretty much on par with his career pace. It's only been in the last year or so that he's started to fluctuate wildly. Overall, though, that blue line has been pretty steady. 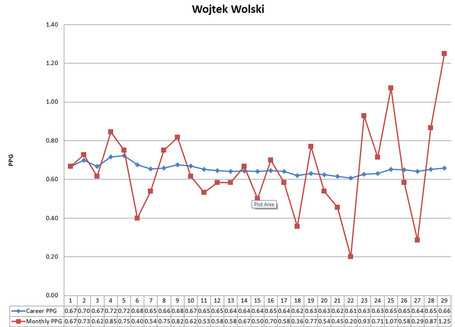 Mueller has been less consistent with his scoring over his career, and overall his PPG rate has trended down - only reversing after his trade. His career PPG has ranged from .50 (41 points) to .68 (56 points). While we have yet to see this with the Avs, he had some bad months in Phoenix. While Wolski has 4 months of .4 PPG or lower (33 points), Mueller has eight...including one glaring goose egg right before Phoenix gave him his walking papers. And Mueller hasn't had any big months either, other than his epic post-trade month with the Avs. 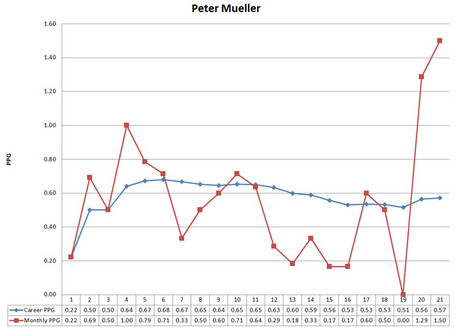 Where am I going with all of this? In a nutshell, Wolski's post-trade surge (18 points in 18 games) isn't much of a statistical anomaly - he's had big months like that before, and the scoring burst didn't cause much of a fluctuation in his overall career numbers. Mueller's jump was much less consistent with his previous trend, meaning future success is by no means guaranteed. In fact, if you had run those numbers from up top at the day of the trade, you would have seen a much bigger scoring gap:

There's that scoring gap I was expecting above. Avalanche fans have fallen in love with Mueller and there's certainly good reason for that. However, before the chickens get counted, Mueller is going to have to prove that that flash he showed before gentleman Rob ended his season wasn't a mini-fluke. Mueller is clearly a talented player. The question is, can he be a consistent 50-point per season player...like the guy he was traded for?