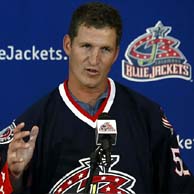 August 2, 2005 - With the lockout over and the salary cap in place, the unraveling of the Avalanche dynasty begins. Longtime Avalanche / Nordique Adam Foote signs a 3-year, $13.5 million deal with the Columbus Blue Jackets. At the time, Foote had played 799 regular season games with the franchise.

Footer, of course, is back with the Avalanche and last year became the second team captain in team history (3rd if you count Sylvain Lefevbre). To date, he's played 920 regular season games with the Nordiques & Avalanche.