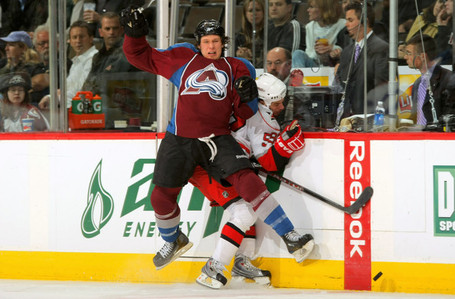 I've always been a fan of the physicality of the game of hockey. A good check can shift the momentum and be a true game changer. Hits make the game more entertaining, and help to draw crowds. Ever since Lappy left, not only has the Colorado box office suffered, but I've been a bit worried about the Avalanche in the "tough" department. And now, with the departures of Hendricks, Tucker, Durno, Clark, Wolski, Svatos, Salei, and Yelle, the Avs have lost a combined 379 hits from last season - or 25% of their hitting. Hendricks ranked 3rd overall on the team in hits per game, behind only McLeod and Foote (Mercier only played 15 games so I left him out of the equation). So on a team that was already deficient with hits, who is going to pick up all that slack?

Stats are inherently troubled, and a game isn't won or lost by hits alone, but typically teams who HIT have a better shot at winning, especially over a long, strenuous 7 game series. Now, some teams have great success without throwing a lot of checks. For example, the cup winning Blackhawks ranked 25th overall in that department during the regular season. This next point can be argued, but generally the Avs played a not too dissimilar game from Chicago last season, and the Avs finished 23rd overall in hits. But not every team can get away with utilizing their speed and skill over physicality. It has been mentioned by many on this site that the Avs have lost key players in recent years to injury, and part of the blame for those injuries has been assigned to the lack of (individual) physical presence on the team.

I agree with that sentiment, and I would love to see the roster bolstered by some increased size & strength. More CGDS and less Svats. It's not simply a hitting deficiency, it's overall team physicality. You gotta have some guys that can throw their bodies around effectively (see Darcy Tucker for the antithesis) to keep other teams honest -  especially if you're going to have a small, fast, skilled roster. If they can't protect themselves, somebody has to. But it'd be nice if they could handle themselves, because I hate "relying" on Koci. Never a good game plan.

Daniel Winnik was a good pick up by the Avs hit-wise, as he threw down 104 hits in 74 games last season for Phoenix, good for 1.4 teeth rattles per game. That's nice, but that doesn't even cover what Hendricks was doing by himself. Here's a simple breakdown of last regular season's roster and hitting (in)ability. All numbers based off games played in an Avalanche uni.

What I drew from this chart:

Damn Svatos! Where'd that come from?!?!  Several other players really pushed their physical game to the next level in the post season too, notably:  McLeod, Hendricks, Porter, and Matt Duchene. That kid just gets more likable by the freakin' minute. Last week Dustin posted a, well, a post, about the Avalanche leadership of the future. Duchene gets my vote. The only bummers for me on this list were Quincey and Hannan who just barely made par. It's the playoffs. Step it up fellas!

Looking ahead: So, while at first glance it may look like the Avalanche will be hit deficient next season, I don't buy into it. If people stay healthy, I truly believe the Avs have a well balanced roster, particularly up front (minus Bob's Russian). On D, it looks like the top six are set and if that's the case Hannan HAS to step up and boast more of a physical presence. The other 5 seem to have clear roles, but Hannan I think needs to be more assertive on the ice and make certain other teams are aware of him. Wilson, I'll light a candle for your health. The likely candidates for call ups or possibly stealing spots out of camp would be: Gaunce, Shattenkirk and Holos. Gaunce and Holos both are physical, especially Gaunce. Shattenkirk is more of a hybrid. So I wouldn't be surprised if they all get serious long looks at camp to help beef up the questionably "tough" defense corps.

Conclusions: it's all about balance. I said in the open that Cup champ Blackhawks slummed it near the bottom of the pack during the regular season in hits, however by the time Toews lifted Lord Stanley's grail, Seabrook and Byfuglien led all players in hits by a combined margin of +40 hits. Physicality matters. Not every player needs to be Dylan MacIlrath, and hits don't ensure wins, but being able to take a hit, while also checking some fools sure as hell doesn''t lose you games.

The Avalanche front office has built a solid, complimentary line up, that when healthy & strong is balanced, despite youth and inexperience. I don't buy into the whispered pessimism about 2010-2011. I don't expect too much of a slide or let down from last season. I'm not one to say this past season of awesome was simply an aberration. The foundation is there, and the kids will be alright. They may not grow by leaps and bounds, but they won't drive off the cliff either. But what happens when someone inevitably gets hurt, you ask? One word: Steroids!

did anyone read this whole thing?

It got a bit rambly at the end there. Apologies. I was too busy thinking Abry's.