So you want to be a hockey player, eh kid? Well you're going to need a lot more than just a mullet and some ice. You'll need talent, training and really rich parents who won't mind you losing something over half the teeth in your mouth. A name with like twelve consonants in a row doesn't hurt either.

Unfortunately, we don't have anyone like that around so we'll be using the somewhere-around-75th-or-so-greatest player in the history of the Colorado Avalanche, Wojtek Wolski.

Quick! You have the puck on your stick! It's 1 v 1 with the goalkeeper and you, only your skills vs. his to decide a close game! WHAT DO YOU DO?!
A. Aim for the top corner of the net and hit it as hard as you can, hoping you hit it in off the crossbar
B. Deke quickly and try and stuff it 5-hole
C. Circle back rather than shoot, instead passing it to a guy with 3 opponents on him

Quick! The opposition's best sniper is coming at you, sitting in the defensive zone with all your defenders caught out of position! There's another opponent coming on the flank as well, calling for a pass! WHAT DO YOU DO?!
A. Play between the two approaching attackers, commiting only when you have an idea puck-handler is going to do
B. Play the pass, trusting your goalkeeper to handle the shooter himself
C. Hope to God that Liles or Cumisky is coming from behind really, really fast as you watch the two opponents blow by you

Quick! It's the deciding final round of a shootout! Score here and your team is in the playoffs! Miss and their best shot comes up with the chance to win! WHAT DO YOU DO?!
A. Deke quickly and snipe the top right corner
B. Zip out slightly to the left as fast as you can, cutting to the right at the last second and tipping it into the open net
C. Go out really far, deke but don't deke back, dangle your stick 6 feet out to the side, not actually noticing that you're closer to hitting the pipe than actually putting it into the net and hope to god that the goalkeeper has never seen or heard about this move before in his life

Did you answer C for all these intense hockey situations? Damn right you did! Congratulations, you're well on your way to being a future hall of famer just like our hero Wolski! 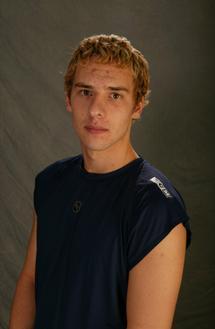 Fuck if you'll ever look this sexy though.