Share All sharing options for: Eulogy for Peter Mueller 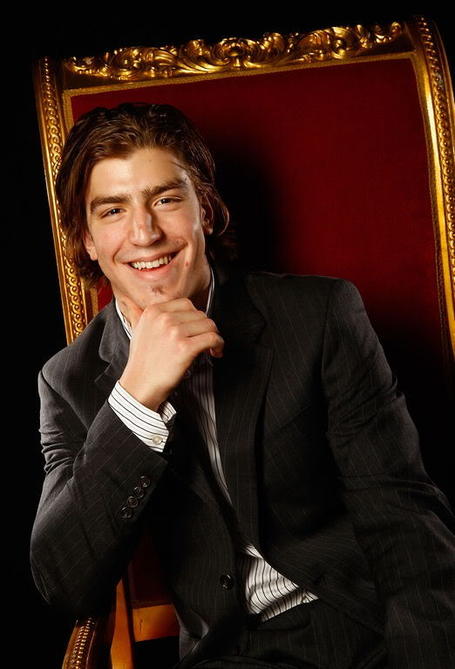 What can I say about the guy? He was liked by many, loved by a blessed few. He was a man among men (or boys at least). He was an 8th overall draft pick, but the top pick in our hearts. His billowy coffee stained locks flowed like the glorious mane of a lion standing atop a slain gazelle. His devilish mustache and goatee whispered suggestions of the haughty strength of an inner warrior-beast unlike anything this world has known. A booming slapper and pin-point accurate wrister his calling card, he was feared and revered by netminders near and far. He entered the Avalanche organIzation amongst disquiet trepidation; "who is this #88 and does his jersey number suggest he is twice the man that was The Baron"? None could be certain where he would take us, yet Ferris gladly adorned the heavy mantle of the Burgundy and Blue, stepped onto the Zamboni smoothed battlefield of ice and paint, and promptly pummeled the opposition to the tune of 20 points in 15 games, before falling to Sir Blake of Dickville is a grotesque display of douche-baggery. Alas, Mueller rose again! From the ashes, like the Phoenix, Peter the Great II returned to distinction with a new, thicker helmet for his thin China-plastic skull! But lo, the new device was not comfy, and so Muller forsook it and entered the fray anyway. Regrettably, in that wanton and meaningless preseason game (that was miserly untelevised by the insatiable King Kroenke), Peter, son of Mueller, was taken out somehow, somewhere, in some unseen "collision". He was taken before his time, before his prime, and his legacy shall forever be enshrined in the oft-echoed Pepsi center lament of "ah shit, not again". He was so young....so beautiful.....You're with the angels now Petey, where no Rob Blake can hurt you. May you soar as high as your pure white angel wings may take you. Your fragile noodle is safe again.

Now on to the more bloggy-serious aspect of this post:

The Colorado Avalanche preseason started off with a bang (however minor or major we don't yet know) to the head of Peter Mueller. There was a lot of excitement surrounding the recently re-signed third year player prior to his second concussion in as many games. Many fantasy previews listed Mueller as a potential sleeper and poised for a break out season. But all of that is moot for now, as the 22 year-old is out indefinitely, for the third time in his brief career.

Whether he came back too soon, was wearing the wrong helmet, or should retire, are pretty pointless discussions (until Mueller sues the Avs for negligence, or vice-a-versa). What I want to focus on is what his loss means to the Avs right now.

0-21. As of Monday morning that's the Avalanche's preseason powerplay record. One reason Mueller was brought over from Phoenix was because he is a true point man on the power play, complete with passing acumen and a big bad shot. He found instant chemistry with Liles who was manning the other point, and the Avs power play began to really click for the first (and last) time all season. Old evil Scotty Bowman used to say the measure of a good team is if they are in the top ten in the NHL in both powerplay and penalty kill percentages. The Avs were 18th on PP last season, and if Mueller is out for an extended period of time, don't expect that to get much better.

Top six. With Mueller, the Avalanche boast a formidable top six forwards. But after that skilled top tier, it drops off fairly quickly to a bunch of relatively unproven kids. Jones hasn't maintained any kind of consistent game count, and Yip found himself in a similar boat in his rookie season last year. Stoa has the talent, but can he keep up with the NHL game? Now, if one of these kids steps up and turns out to be a true top six forward, hallelujah! But, don't forget that opens a spot on the third or fourth line for someone else to come up, stretching the limited depth even farther.

Unity! As one stand together. The exciting line of Mueller-Duchene-Hejduk has been the most talked about line since it's inception. And fan's reports of the trio out of training camp sounded like a stadium of teenage girls rioting at a Justin Beiber "concert" (lip sync "singing" is not a real concert people!). So the line with the most chemistry, the line that was supposed to give other team's D fits, is no more. Automatically, team's will be able to focus more on Stastny's line. The Avalanche do not have the talent or skill to be a one line team and expect to get anywhere.

Hair. Both facial and the regular type. Nobody on the roster has better hair than Mueller's new flowing locks. His devil goatee was also first class. This is a loss the Avs will not rebound from.....

So can the Avs overcome these seemingly damning obstacles? Of course, they're the Avalanche for St. Patrick's sake! But it's gonna take a lot of people stepping up right out the gate. Or, as recently rumored, making a trade or signing a free agent. Injuries happen, and no one expects all top six to be healthy all year, but Mueller's departure is awful for him, and the Avs. Most every prediction around the interwebs suggested that the Avs have to stay healthy to remain in contention. Well, we're about to find out.