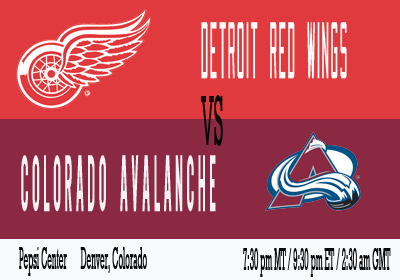 Back on December 17th, I described this 8-week stretch as the defining moment of the Avs' season. So far, I'm not really digging the definition. The Avalanche have won just two of their last 9 games and now have the dubious distinction of being one of just 3 teams to lose to the Islanders twice this year. Yuck.

One of the better games the Avs have played over this stretch was against tonight's opponent, the Detroit Red Wings. Special teams - especially the penalty kill - ended up dooming the Avalanche in that game. If the Avalanche can bring that same effort tonight and if the Avalanche can kill a penalty or two, then this may just be the game the team needs to get off the snide. Those are two big "ifs", though.

Peter Budaj will start for the Avs tonight, which means he ends up with all four starts against Detroit this year (this is the last time we see the Wings this year in the regular season). The bigger question is whether Kevin Shattenkirk will play; he is day to day after taking a puck to the skate on Saturday and his status will be determined later today. Kyle Cumiskey is closer to returning to action, but has been ruled out of tonight's game, so if Shattenkirk can't go, Jonas Holos will get the call.