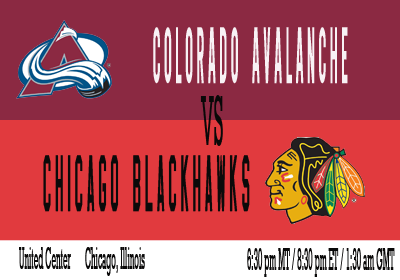 The Avalanche will try to build on a big win against Detroit on Monday, as they visit the Chicago Blackhawks at the United Center in Chicago. This is the final matchup of the regular season between the two teams, and the Avs try to make it a clean sw....woops, almost threw a little jinx language in there. Let's just say that the Avalanche have won the previous 3 meetings against the Hawks and also mention that the Avs are 8-1-1 against the Central Division so far this year.

Chris Stewart has returned to full-contact practice, but he has not yet been cleared to play. Kyle Cumiskey is also on the trip, but missed practice Tuesday do to illness. Kevin Shattenkirk also missed practice; he is day-to-day with a foot injury. Finally, Cody McLeod has also returned to practice - he's been out with an injured groin.

The big news, though, is that Skipper Joe Sacco will hand the keys to Peter Budaj, giving him his 2nd start in a row. While Sacco said this is just because Budaj played well against Detroit, you have to wonder if Sacco is trying to get into the head of Anderson. Anderson, an Illinois native, will be missing out on a chance to face his old team. Could this light that fire that's seemed missing at times this year? It will be interesting to see how this shapes up indeed.

The league's number one power play will be squaring off the league's second-worst tonight, so fasten those chin straps. Go Avs!