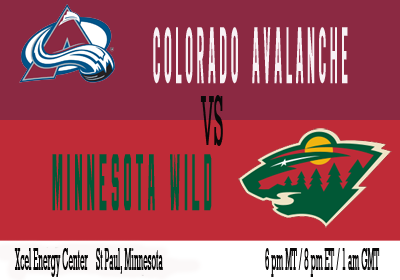 The Avalanche visit the Minnesota Wild tonight at the Xcel Energy Center in St Paul. And I have to say, this game has more potential angles than on an MC Escher painting.

First and foremost is the return of Chris Stewart, last seen flapping his good hand towards the Minnesota bench after breaking his other hand in a fight with Kyle Brodziak. The Avalanche have struggled a bit with Stewart out of the lineup, going 9-7-4 in his absence. More tellingly, the Avs have been outscored 71-61 - a rather significant 10-goal deficit for the 20-game stretch. With the Avalanche coming off an anemic shutout "performance" on Wednesday, Stewie will be counted on to contribute offensively immediately. And I'll go out on a limb here and venture that Stewart will not be in any fights tonight.

It sounds like Stewart will be reunited with his old partner, Paul Stastny. That presumably moves Milan Hejduk back to the line with Matt Duchene and Tomas Fleischmann. With that in mind, I think David Jones will move to the left side of the Stastny & Stewart line.

Cody McLeod is also expected back tonight, and who gets sent to the press box is another angle. Stewart's return already bumped Greg Mauldin off of the roster. With McLeod playing, it likely sends Brandon Yip to nacho detail. McLeod is one penalty minute away from becoming the 2nd Avalanche to record 100 penalty minutes in 4 straight seasons (Lappy being the first).

Angle #3. The Avalanche will be facing a rookie goalie I've never heard of (Anton Khudobin) making his second career start. With Niklas Backstrom on the shelf, Jose Theodore has been starting for the Wild and playing well (the NHL's 3rd star last week). But Theodore was injured in the last game and did not practice Thursday. So, the Avalanche either face an ex-Avalanche or an unknown rookie. Neither choice works really well for me.

Angle #4. For the Avalanche, Craig Anderson will return between the pipes after wearing the baseball cap for two straight games. He has 1 win in his last 7 starts and is just 1-4-2 all-time against the Wild.

Angle #6. Brian Reynolds from the Hockey Wilderness is not a big Adrian Dater fan. No, really. I'm not kidding.

Angle #7. Matt Duchene is playing in his final NHL game as a teenager. He turns 20 on Sunday. He needs two points to become the youngest player in franchise history to get 100 points. Joe Sakic was 20 years, 163 days old when he did it

Angle #9. Kevin Shattenkirk has 1 point in his last 11 games. John Michael-Liles has 2 points in his last 12. Getting Chris Stewart back is great and all, but these two guys are vital to getting things back on track.

Angle #10. Unless the Avalanche score at least a point tonight, they will be in danger of dropping out of the top 8 by Saturday (St Louis is just 2 behind).